In a Thursday night (Perth time) elimination final, the Western Bulldogs defied history and the betting markets by shredding the West Coast Eagles at Domain Stadium. 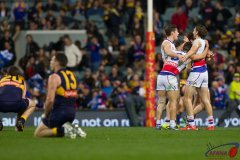 Eleven days earlier the Bulldogs had been humiliated at the same venue by losing to the struggling Fremantle Dockers. Experienced tipsters gave the Bulldogs no chance of defeating the Eagles who had lost only one home game this season. To build on the proclaimed certainty, it was pointed out that the Bulldogs had never won an interstate final and their team had very few players with finals experience. The Eagles, who played in last year’s Grand Final were loaded with experienced players who had played in numerous finals. The result was a forgone conclusion.

The Bulldogs though, displayed no respect for history, or common wisdom, and immediately made attacking the ball their sole focus. They won the first center clearance and spent the first two minutes probing the Eagle defense, only to kick just two behinds (scores of 1 point each between the major and minor goal posts). The Eagles then launched their trademark attack of long kicking into their forward line; aiming for either Jack Darling or Josh Kennedy to mark (catch) the ball and take set shots on goals. The Bulldogs surprised by spoiling the first Eagle sortie; but a miskicked clearance from defense by Bulldog defender Stephen Briggs, landed on the chest of Eagles’ champion forward Josh Kennedy. Kennedy then kicked the first major score of the game and after seven minutes of play, order was restored to the script. Two minutes later big Jack Darling scooped the ball from a pack of players near the Eagles' half-forward boundary line and booted a huge Eagle goal from 55 meters. The Eagles had stacked their team with tall players with the view that their aerial dominance would hand them an easy victory. The Eagles midfield players: Matt Priddis, Luke Shuey, and Andrew Gaff then fired up the engine room and dominated the center clearances. Around the ground however, the smaller Bulldog players showed larger appetites to run to contests than their highly credentialed opponents. The Bulldog’s Caleb Daniel, the smallest player in the AFL, burrowed into packs to support runners Matthew Boyd and Luke Dahlhaus. In addition, Tom Boyd began to take some big marks up forward to bring other Bulldog players into the game. Liam Picken tore into every possible contest and eventually goaled from a free kick at the 13 minute mark. Two minutes later the diminutive Daniel received a handpass and kicked a goal from 50 meters. The Dogs were in front and the Eagles attempted to regather the leash to control the Dogs’ desire for a contest. The Eagles won the next center clearance but again the Dogs were able to force a midfield turnover. Picken launched a long kick to Tory Dickson who goaled at the 19 minute mark. The ball shot from end to end but the Dog defense stood firm. Picken again featured in attack for the Bulldogs, to take a strong mark and kick to Tony Liberatore, who snapped a clever goal. The Dogs had won the first quarter but the general expectation was that their youthful enthusiasm would expire as the game progressed and the Eagles’ big men would dominate.

It didn’t happen. The Dogs continued to run to contests and outnumber and outmaneuver the lumbering Eagles. The Dogs led in possessions, tackles and clearances; and with Tom Boyd and Jordan Roughead taking their share of marks they began to lead in that statistic as well. In the second half of the second quarter the Eagles found some free space and Mitch Brown, became an unlikely rover to read the ball off a pack and snap a goal. However, by this time the Dogs had kicked seven unanswered majors since Darling’s effort in the first quarter. The Dogs were serious, the Eagles appeared less so. Several Eagle attacks were ruined by poor goal kicking, but somehow they were still within touch at the main break. The home supporters were convinced their team would rally and storm back into the game. A loss was unthinkable.

In the second half the Dogs continued with their tactic of keeping all players within a kick of the ball. This kept the game on the Bulldogs’ terms. The midfield was congested and their small players had more ability to weave and handball past the outnumbered and lumbering Eagles. The Bulldog midfielders then kicked over the heads of their forwards, to allow their sprinters to race towards open goals. This tactic negated the marking dominance of tall Eagle defenders Tom Barras, Will Schofield, and Jeremy McGovern. A quiet Josh Hill attempted to add some spark to the Eagle forward line by taking a huge grab and kicking a goal. But that was it. The Bulldog midfield continued to run harder and support each other. By the last break, the Dogs had again extended their lead.

The game was won by ten minutes into the final quarter. The Dogs’ leg speed and quick handpasses in confined contests had completely demoralized the Eagles. The Eagles relied on too few to do too much. The Eagles’ smaller players, Shannon Wellingham, Jamie Cripps, Dom Sheed, and Eliot Yeo contributed little when desperation required. West Coast will have a long hot Perth summer to reflect on how they have failed miserably in consecutive final losses. For the Bulldogs, players such as Luke Hunter, Jason Johannisen, Jack Macrae, and Tom Liberatore rose to the occasion and guided the Bulldogs towards a meritorious victory. A broken collar bone for Lin Jong and a late hamstring injury to Tory Dickson won’t help the Bulldogs’ cause when they play either Hawthorn or Geelong next week. However, if they continue to want the ball more than their opponents, the dream will stay alive for these young Bulldogs who show little respect for history or reputations.