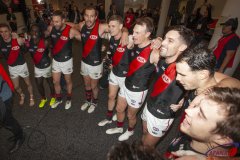 has to go to the West Coast Eagles, which hosted Essendon with a chance to take sole possession of first place on the AFL ladder. Unfortunately for the Eagles, the losses of key forwards Jack Darling and Josh Kennedy gave Essendon the chance to cause an upset, and that is exactly what the Bombers did, riding a scintillating six goal first quarter to take the win and leave 50,000 plus Eagles fans in despair.

In other games, Collingwood withstood a gallant challenge from an injury hit Carlton to register its fifth win in a row, North Melbourne squeaked home with a last gasp goal against a devastated Western Bulldogs, and Hawthorn comfortably accounted for struggling Gold Coast despite a sluggish start. Greater Western Sydney kept its finals hopes alive with a solid win over Brisbane, but the win may have come at a cost after gun forward Jeremy Cameron hit Lions defender Harris Andrews with an errant elbow to the face.

With the top two teams on the AFANA Power Poll enjoying the week off before they meet each other in round fifteen, here’s how the rest of the league shakes out after the last bye week for the season.

3.    Collingwood Magpies (5)
Collingwood did what it needed to do in dispatching Carlton en route to its 5th win in a row, a stretch that has seen the Magpies forward line develop into one of the most varied and potent in the league. With big Texan Mason Cox, young livewire Jaidyn Stephenson and the constantly improving Jordan DeGoey and Will Hoskin-Elliott all a threat to hit the scoreboard, Collingwood is in great shape to press for a top four spot come finals time.

5.    West Coast Eagles ( 3)
The Eagles lost for the second time in two weeks, and might find themselves without three first choice forwards in Josh Kennedy, Jack Darling and now Mark LeCras for an away game against an under fire Adelaide Crows on Saturday. It’s a big week for the Eagles.

6.    Port Adelaide Power (7)
Port Adelaide racked up another win on home turf, this time against highly fancied Melbourne. Despite having the ball inside their 50 meter arc just 39 times to the Demons 69, the Power converted their opportunities much more efficiently than their opponents, with Justin Westhoff having a big influence on the result. A handy draw gives Port a solid chance of a top four finish.

7.    Hawthorn Hawks (8)
The Hawks took care of the struggling Gold Coast Suns in Tasmania for three wins in a row, with Alistair Clarkson’s team building nicely for the run home. Liam Shiels and Jaeger O’Meara were outstanding for the Hawks.

8.    Melbourne Demons (6)
The Demons played some excellent football against Port Adelaide on Friday night, and had every chance to win the game given the amount of forward thrusts and clearances they produced. Unfortunately for Coach Simon Goodwin, his players too often blazed away with long kicks inside 50 meters that played into the well set-up Port defense. If the Demons can get that right, they will be hard to beat.

9.    Greater Western Sydney Giants (9)
The Giants produced a workmanlike performance to defeat the Brisbane Lions, with star midfielder Josh Kelly back to his best with a dominant performance all over the ground. The negative from the game was potentially losing key forward Jeremy Cameron for multiple weeks after he felled Brisbane’s Harris Andrews in a nasty head high clash. Losing Cameron will stifle the Giants attempts to make the top eight.

11.    Essendon Bombers (11)
The Bombers attacked early and often to open up a six goal quarter time lead against the Eagles in Perth on Thursday night, a lead that proved too much for a punch less West Coast team to chase down. Devon Smith and Adam Saad were magnificent for Essendon in yet another strong performance that shows the promise of a team which is frustrating supporters with a lack of consistency.

14.    Western Bulldogs (14)
The Bulldogs put up a hell of a fight against the Kangaroos, but a lack of composure under pressure in the dying seconds condemned the young team to a fifth straight loss.

16.    Brisbane Lions (16)
Since the Lions produced a great win against Hawthorn in round nine; it has been four losses on the trot for the struggling club. There is plenty of work for Coach Chris Fagan to do at the back end of the season.

17.    Carlton Blues (17)
The Blues went down again, but they did produce a much better performance against in-form Collingwood at the MCG on Sunday. Young stars Charlie Curnow and Patrick Cripps were magnificent for Carlton, giving fans some hope for a brighter future.

18.    Gold Coast Suns (18)
The Suns played a very strong first quarter against the Hawks, but once again couldn’t sustain any sort of form for a full four quarters in yet another loss. The solid form of forward Peter Wright was a positive in a once again rough day for Gold Coast fans.