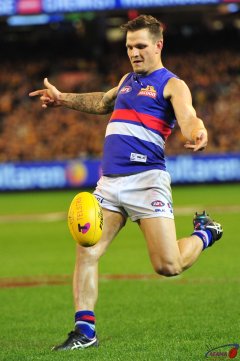 Coach Luke Beveridge paid tribute to Smith, “It has been emotional time ... because Clay is such an admired and loved person around the place, and it’s sad his career has come to an end ... To have the mental application and strength to work through all the setbacks he’s had to deal with has been inspirational to watch and his tea-mates have been motivated by his determination... He should be so proud of what he did to overcome all of his challenges, and content that he will always be a Western Bulldogs premiership player. We will miss him dearly when he leaves the building, but we will always be connected.”

Former Bulldog Bob Murphy also paid tribute, describing Smith as "... a human heart on two pumping legs ... He is a very emotional guy .. .and loves his team and has got a lot of empathy for people ... he just attacks life with a real sense of vigor and that’s how he played ... just 100 miles an hour and he was just crueled by these knee injuries. He played with so much heart, but that’s how he lives his life, he is very passionate about his family and his friends. He is an absolute beauty.”

Smith was drafted in 2011 and debuted the following year, kicking four goals against the Eagles on debut. He played a total of 16 games that year. He then was plagued with knee injuries over the next years, rupturing his ACL three times in three years. He did all the rehab and finally returned to the side mid-season 2016. He kicked eight goals and averaged 18 disposals in the four finals, including four goals and 26 possessions in the preliminary final win over GWS.

He played a total of 55 games and kicked 43 goals in his short career. He has not played a senior game this year due to ongoing knee issues.