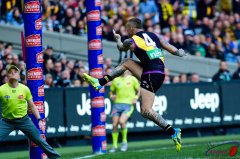 Castagna put the Tigers on the board early with the first goal of the match. A huge roar from the Richmond crowd confirmed his goal as the ball traveled between the big sticks. Higgins was awarded a free kick as Tom Phillips could not dispose of the ball correctly and kicked the Tiger’s second.

At the other end of the ground it was the father/son picks scoring for Collingwood. Josh Daicos tackled Nathan Broad in the forward pocket and his free kick also resulted in a goal, the first for the Magpies. Brandon Ellis then gave away a free kick for too high to Callum Brown and he made no mistake with the set shot and giving the Magpies the lead for what would be the only time for the match.

Castagna hit Jack Riewoldt on the lead, he marked over Scott Pendlebury and kicked the set shot around the body for Richmond’s third for the match and shortly after assisted in another. Castagna marked about 60 meters out and dished off a quick play on handball to Jayden Short running past. Short’s long kick clearing the pack in the goal square for Richmond’s fourth goal.  Collingwood’s defenders learned nothing from that with Baker also marking outside 50 and repeating the dose a minute later also giving the play on hands off to Short who once again drove the ball home.

Jeremy Howe left the ground after a collision with teammate Darcy Moore’s knee. His vision was impaired and he would not return to the game. At quarter time it was a 17-point lead to the Tigers. Despite Collingwood’s onballers racking up the stats their disposals were largely ineffective.

Cox Watch: The big American Mason Cox started up forward and the Tigers put Astbury on him. He appeared to have his arm chopped at more than one contest for the quarter but not given the protection from the umpires he deserved. He went into the ruck halfway through the quarter. At half back he was awarded a tackle against Nankervis and the Collingwood crowd roared with approval. He had a spell on the bench with eight minutes to play and returned for the last four minutes in the ruck. Stats for the quarter were 1 kick, 1 mark, 2 handballs, 1 free-for and 1 free-against.

Collingwood started the second quarter well with Josh Thomas roving the front of the pack and snapping a goal and Mihocek slamming home their second after a great contested win by Daicos sent the Pies forward. But the Tigers refused to yield too much on the scoreboard. Caddy provided the answer for Richmond from 51 meters out on the boundary with a great goal and breaking the Collingwood hold on the quarter.

Mason Cox finally got clear and onto the end of a kick inside 50 from Thomas (40 meters out) straight in front. He went back and calmly put the goal straight through the middle. The Magpies continued to lift their intensity around the ball, forcing the Tigers to make some uncharacteristic mistakes.  But Collingwood’s own disposal was poor and they did not make the most of the situation.

Jack Riewoldt again got on the end of a ball inside 50 for the Tigers, this time a high one and with the advantage of having Moore having to run back with the flight he easily took the mark. The shot at goal from 20 meters out straight in front was a formality. With the ball back inside Collingwood’s attacking 50 Cox out sized Richmond’s backup ruckman in Grimes.  Grimes grabbed Cox’s arm in the ruck contest and Cox was awarded the free kick, getting the 6 points for the set shot from 35 meters out.

Collingwood again looked like they might break Richmond as Hoskin-Elliot marked a high ball from Mihocek in the goal square and his goal reduced the margin to two points late in the second term. But it was the unstoppable force of Dustin Martin that gave the Tigers a bit of breathing room just before half time when he slipped forward to the square. Just moments earlier he gave away 50 meters and appeared to refuse the runners effort to take him to the bench. He beat Greenwood in the marking contest from behind and kicked the goal as the half time siren sounded and the Tigers lead by 8 points.

Cox Watch: Cox spent his time this quarter between the forward line and in the ruck. He kicked two nice goals and was working hard at ground level around the contest in the air.  It was also noticeable that where possible Cox would stand the mark when a Richmond player was taking a shot at goal forcing a higher kick to clear his hands. At one point in the quarter Cox was recovering from a low blow and still pushed across to the wing and backed into a marking contest to prevent an uncontested mark to Richmond. Stats for the quarter were 3 kicks, 2 marks, 1free-for, 2 hit-outs and 2 goals.

Dustin Martin started the third quarter as he finished the second, in the goal square and when a scramble kick was fumbled in the goal square, Martin pounced on it and kicked the goal. Cox started the quarter at full forward and he lead to top of the 50, marking and giving off quick hands off to the roving Thomas. Thomas hit Greenwood with a pass and then Greenwood returned the favor with the ball ending back in the hands of Thomas in the pocket. His goal from 25 meters out and Hoskin-Elliot’s goal after he marked in the square once again had Collingwood back in the hunt.

But it was Richmond who has all the answers. This time it was Higgins who kicked a spectacular and somewhat controversial goal.   Tracking the ball back to the behind line, Higgins managed to hold the ball within play despite most of his body being over the line, he then threw the ball up in front of the goal post, still in play, while he went behind the post, he then kicked the ball out of the air over his head for a goal with Moore unsuccessfully trying to spoil. The goal review confirmed no problem with the ball being touched and the umpires did not penalize Higgins for a throw.

Josh Thomas continued his great form today by roving the contest that went over Cox’s head and snapping the goal.  Richmond again stepped up their attack and had more numbers running forward, with the ball ending up in the hands of Castagna who kicked a goal for Richmond. But Thomas again answered for the Magpies, fleet of foot roving the front of the pack and snapping his third for the quarter. Stephenson’s snap just before the three-quarter time siren hit the post meaning that Richmond held onto a four-point lead going into the last quarter despite coming under heavy attack from Collingwood in that quarter.

Cox Watch  It was Cox’s quietest quarter for the match statistically. He started deep in the forward line, playing out of the square.  Rance, Richmond’s key defender played on Cox. Cox was a real focal point, with Collingwood players kicking the ball long to him, even when they perhaps had better uncontested options. He appeared to be held multiple times during the quarter during the marking contest so was unable to capitalize on the delivery. The tactic was not a complete failure as he was a focal point for Collingwood and this predictability allowed the smaller players like Thomas to get front and center and kick goals. Stats for the quarter were 2 handballs and 1 mark.

Richmond came out in the last quarter and finally stamped their authority on the game with Jack Riewoldt and Townsend kicking goals in the first three minutes. Cox marked at top of the 50 on a lead, too tall for Rance on this occasion but he hooked his set shot kick to the left, much to the delight of the big Richmond crowd. Richmond cleared the ball quickly and Lambert kicked long to Martin in the square, he dominated Greenwood and drilled the Tiger’s third unanswered goal for the quarter. At this point, it seemed the match slipped out of out the Magpies reach.

Cox again was able to mark inside 50 again on the lead but his kick from 50 meters out straight in front missed again, this time wide to the right. Collingwood unable to put up any serious challenge to the Richmond onslaught. Richmond added another two goals to continue their display of power with Edwards and then Rioli kicking goals for the Tigers. Finally, it was a nice ride on Grimes to take the mark that saw Hoskin-Elliot pull a goal back for Collingwood late in the quarter.  But it was too little too late as the Tigers ran out convincing 28-point winners.

Cox Watch:  Cox had two set shots from marks on the lead but could not make produce a goal from either when the Magpies really needed it in the final quarter. He gave away a free kick to Rance who appeared to exaggerate the contact from Cox as a hold, which given his own experiences earlier in the matches must have frustrated the big man. At one stage in the last quarter Cox contested for a mark, brought the ball to ground and then shepherded Pendlebury so he could deliver inside 50. Stats for the quarter were 2 kicks, 1 handball, 1 mark, 1 free-against and scored one behind – finishing with a total of 6 kicks, 5 handballs, 6 marks, 1 tackle, 2 hit-outs and kicked 2 goals, 1 behind.

Collingwood players had plenty of the ball, but overused it and turned it over under fierce attack from the likes of Edwards, Ellis and Caddy worked hard all day for the Tigers.  Dustin Martin was well tagged by Levi Greenwood, but Martin was still able to get forward and kick three goals and collect 19 possessions and apply pressure to Collingwood when they had the ball.  The 9-player spread of goal-kickers for Richmond would have pleased coach Damian Hardwick.  Collingwood coach Nathan Buckley left to wonder what might have been in the final quarter had he not lost Howe and Scharenberg earlier in the match.

The Tigers have seen off another challenger and seemingly need to just hold their group together on the park in the remaining home and away rounds to be a big chance to go back to back this season.