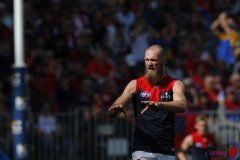 The first quarter was somewhat of a shootout. Both sides getting a run on that looked like they might take control of the game. Tom McDonald put the Dees on the board early following a quick clean chain of footy, with the halfback hitting him on the lead. GWS evened up the score a minute later when a long ball inside 50 was roved by Coniglio who ran the ball uncontested into the goal square and goaled. Tomlinson doubled this up for the Giants just a minute later, leading and marking 30 meters out before kicking the set shot.  When an unmarked Rory Lobb kicked their third goal halfway through the first quarter, it looked like they were setting up for a big day.

But the Demons wrested back control and James Harmes pegged one for the Demons with a successful shot outside the 50 meter line for a goal and within a minute Vandenberg added another to have them one point up. Tom McDonald bookended the Demon’s scoresheet for the quarter, again getting on the end of a good lead to the top of the 50 meter arc and converting the set shot for maximum points.

Jeremy Cameron kicked one for GWS late in the quarter marking deep in the pocket and kicking the tight set shot. At quarter time, it was just one point the difference.  A good ruck battle had ensued between Gawn and Lobb with Gawn just a bit better.  On the ball, it was Tyson for the Dees and Coniglio for the Giants leading the way.

Angus Brayshaw got things underway immediately in the second quarter with a running goal within the first 30 seconds of the second quarter.  The Giants didn't mess about at the other end either with Himmelberg on the quick lead marking and goaling. From here it was a bit of a slog but with Melbourne getting the upper hand.  Tom McDonald was on the receiving end of a handball fed out of the pack, and kicked his third goal from point blank range.

Gawn was working hard at halfback being extra number in defense as Melbourne’s player stocks took a blow.  Kent left the ground for the demons with a shoulder injury and would take no further part in the game.  Dom Tyson also went down to the rooms with a wrist injury and then Jake Melksham has a head clash with Harmes and also left the ground. This left one on the bench for the Demons. But the Demons kept coming and on the turnover, Jones ran through half forward and hit an unmarked Petracca 20m out, but his set shot hit the goal post.  A minute later though, he made amends as the Demons ran the ball in from the pocket in numbers, and he snapped the goal over the GWS defender at the top of the goal square.

A free kick was given to Coniglio at the siren, as Jetta was deemed to have had prior opportunity and not disposed of the ball. The kick for goal after the siren could have nearly evened things up, but his shot went wide and left the Giants 13 points in arrears at halftime.

Melbourne again were first off the mark in the third quarter with Oscar McDonald hitting Max Gawn at the top of the 50 meter arc. Petracca then followed up a minute later with another from the pack taking them out to a 25 point lead.  He then kicked their next goal as well, his third for the match. The Giants were in danger of losing touch. They managed to hold their ground for around 10 minutes but it was Nathan Jones who pounced on the loose ball and and checkside kicked the goal for the Demons. Neal-Bullen kicked their fifth for the quarter as he kicked while running inside the 50. At three quarter time, a 43 point lead to the Demons looked unbeatable.

Melbourne’s match winning lead would not be taken from them. They moved the ball well in the last quarter and while GWS did not give up and produced goals to Coniglo early in the quarter, plus Langdon and Finlayson late in the quarter, the Demons looked winners to the last. Goals for them to Weideman, Neal-Bullen and Melksham allowed them to extend the lead by two points and a final winning margin of 45 points.  Melbourne finishing the home and away season in fifth and will play in their first finals series in 12 years. Their final percentage (ratio of points for to points against for the season) was the highest for the club since 1964 - a premiership year.

Coniglio and Ward the best players for GWS, while Harmes, Brayshaw and Gawn the best for the Demons. Gawn’s round 23 match might draw Brownlow votes and in the end perhaps that might give him an outside chance to take out the prestigious award.