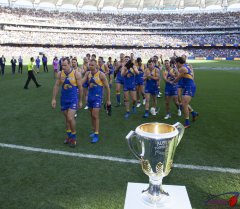 Melbourne only managed three points in the first quarter, despite Max Gawn’s dominance in the ruck. They were uncharacteristically fumbling in their delivery, falling and slipping over at critical moments. Jordan Lewis made a rare error when he tried to handball over his head deep in defense. Josh Kennedy intercepted and the Eagles kicked the first goal of the match. The decibel level of the noise the crowd generated rivaled an Aerosmith concert. West Coast kicked four goals in the first term and had two overturned when it was determined they were touched prior to going through the posts. It was clear that the Eagles had come to exact some payback for their defeat last time the sides played.

Kennedy added two more goals within the first two minutes of the second quarter. Liam Ryan, living up to his nickname “Flyin’ Ryan”, took mark of the round with a aerial grab and goal soon after. His teammates Mark LeCras and Jack Darling were invited to the show giving the Eagles a spread of six goal kickers. The breadth of options in the forward line meant that the Melbourne backs could not cover everyone when the ball came forward. Melbourne became the first club, in a final, to fail to score a goal in the first half since 1927.

Unfortunately for Melbourne it was all over by half time. They were 63 points down at that stage and were not doing their image much good by continuing on at that rate. Gawn was still dominating the hitouts with an eight to zero advantage over Scott Lycett. Quick movement from the first ruck contest of the third quarter had the ball in Melbourne’s forward line. Clayton Oliver weaved his way through a couple of opponents to have Melbourne’s first goal on the board.

If it weren’t for a couple of dubious free kicks awarded right in front of goals, that would have been all they had until Joel Smith’s conversion towards the end of the quarter. Jake Melksham found himself in the umpires’ favor and scored two goals. One from a free kick that perplexed everyone and another from a soft 50 meter penalty awarded against the Eagles.

One of the highlights of the quarter was a scintillating run by Ryan through the wing where he handballed out in front to himself, batted the ball forward to collect, bounced once then hit a laces-out bullet to Daniel Venables. Venables did the right thing by his teammate and slotted the goal through.

Tom Barrass was playing his 50th game and along with the rest of the back six was standing tall against any attacks the Demons were mounting. Barrass had six intercept marks, which like Jeremy McGovern is becoming characteristic of his playing style. Jason Petracca and Angus Brayshaw were giving Melbourne some drive but it was too late in the game to make much of an impact on the difference in the scores. The Demons managed to make an even contest after half time and if they could have found some of that in the first half it might have been a different outcome for them.

West Coast will now travel for the first time in a month to Melbourne to face Collingwood in the Grand Final. Bookmakers have the Pies as the favorites but the Eagles have beaten them in both matches they have played this year – at home and away. The Eagle will be going into their second Grand Final in four years and if they learned their lessons from the last one, they will emerge with a premiership.