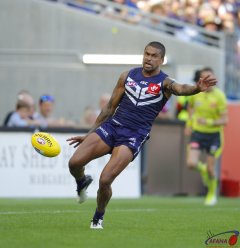 as their new attacking structure took advantage of the new rules and a more open style of football. Although North’s Todd Goldstein had a slight advantage over Fremantle’s Luke Darcy in the ruck, the Dockers won more clearances through the agency of Fyfe’s ten bullocking clearances. Ben Cunnington battled manfully in the center, and around the ground, for the Roos with seven clearances. Shaun Higgins tried to offer midfield support, but his effectiveness was limited by the close attention of Darcy Tucker. Tucker personified the Docker midfielders’ pressure on the North ball carriers, which frequently caused turnovers and made the Roos look slow.

The Roo’s star forward, Ben Brown, was comprehensively thrashed by emerging Docker defender Alex Pearce. Pearce was ably supported by Joel Hamling and Luke Ryan as they closed out Jack Ziebell and Kayne Turner, allowing the Dockers to launch attacks from the last line of defense as Pearce ran off the lumbering Brown.

Dockers’ winger Brad Hill took advantage of the new 6-6-6 placements at center bounce downs to roam the open spaces and use his pace to provide a sure conduit into attack. His immediate opponent, Jared Polec, got as much of the ball as Hill but did not cause equivalent damage with his delivery. Jamie Macmillan was under pressure all day and did well for the Roos in defense. His work as a link man gives the Roos something to build on. The other bright light for the Roos was first gamer Bailey Scott who ran hard and showed balance with his 21 possessions. There was little else to enthuse the North supporters. In the second half the visitors booted just three goals; and two of them were when the game was done and dusted.

The big story for the Dockers was the re-emergence of Cameron McCarthy. The out-of-favor forward came into the team to replace star recruit, Jesse Hogan, who was ruled unfit due to mental health issues. McCarthy, who has suffered similar issues in previous seasons, made the most of his chances and booted four first-half goals to finish with five for the day. McCarthy’s job was made easier when his initial opponent Ed Vickers-Willis injured his knee in the first quarter and could not complete the game. The absence of Vickers-Willis’ height compounded the Roos’ problems in defense, where they also had to contain the Dockers’ new tall forward, Rory Lobb. The former Giant teamed well with McCarthy to provide another attacking option and finished with two goals in his debut for the men in purple.

Jy Simpkin was largely ineffective for the Roos in the mid-field and along with Jack Ziebell will be expected to offer more as the season progresses. With the retirement of Jarrad Waite, the Roos’ key forward Ben Brown has been left exposed and too easy a target for opposition defenders. Unless the Roos can find alternate avenues to goal, their success this year will be limited.

The Dockers, on the other hand, now find themselves with an embarrassment of riches in key forward stocks. The addition of Lobb and the growing maturity of Matt Taberner allow the Dockers to play a more direct style of game where they can take advantage of Fyfe’s power in the center square. Their young players around the ground have also developed a hunger for the ball.

Next week the Dockers take on the Gold Coast Suns who made a brave showing against the Saints. North Melbourne return to Marvel Stadium, at the Docklands, to host the improving Brisbane Lions.