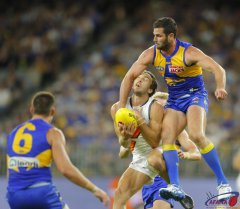 The Giants opened strongly by dominating for most of the first quarter. Their first goal, at the two-minute mark, was unusual. Eagles’ defender Neville Jetta attempted to knock the ball out of the Giants goal square, only to see it bounce of the Giants’ Zac Williams’ shin and cross the goal line. After a lengthy video review the umpires ruled a goal had been scored. The Eagles’ first goal was also unusual as it was against the run of play while the Giants were dominating. Giants half-back defender, Matt Buntine, attempted to switch play across the ground but found the Eagles forward Jack Darling.  Darling kicked to Mark Hutchings who finished without pressure. Darling then booted the Eagles second at the 16-minute mark after being on the end of the Eagles first positive attacking entry.

The dour first quarter struggle continued to midway through the second quarter. Key forward Giant, Jeremy Cameron, read the ball from a Jeremy McGovern spoil and sprinted away from both McGovern and fellow Eagles’ defender, Tom Barrass, to score for his team. The Giants then ran the ball through the middle of the ground to Sam Reid who put the Giants in front at the nine-minute mark. From there -  it was all West Coast, as Luke Shuey lifted to play inspired football, and the locals hammered home five unanswered goals to have a handy halftime lead. The Giants had their chances but missed "get-able" opportunities or were repeatedly repelled by the Eagles' big defenders. The Giants delivery into the forward zone was poor and gave their forwards little hope of adding to the score.

A mini fight-back by the Giants early in the third quarter was soon shut down by West Coast and the game was all but over before the third quarter had ended. By the final siren the Giants had made 62 entries into their attacking zone to score just seven goals. In stark contrast, West Coast scored 14 goals from their 47 attacking entries. The Giants’ forwards were off target too often; however, the biggest problem was the delivery of the ball from their midfield. The Giants sparkled as they moved the ball out of defense, and across the ground, but lost their shine as soon as the ball crossed half-forward. This was partly due to pressure from the Eagles’ midfielders, as they locked up play; but mostly it was due to poor decision making and execution. The Eagles’ Brad Shepherd blanketed the Giants prime mover Steven Coniglio. The Giants’ Matt de Boer shadowed the Eagles’ Elliot Yeo to blunt Yeo’s effectiveness. The midfield grunt for the Giants was provided by Lachie Whitfield who ran all game and initiated most attacks. He was ably supported by Zac Williams who ran off half-back. For the Eagles it was Luke Shuey and Dom Sheed who linked the ball in the midfield. The Giants' ruckman, Dawson Simpson matched the Eagles ruck pair of Tom Hickey and Nathan Vardy but the latter pair combined for 13 marks (catches) whereas Simpson took just one mark.

The two teams mirrored each other in winning contested possessions and tackles, but the Eagles out-marked the Giants in most positions. When the Giants ran the ball through the middle of the ground their pace exposed the Eagles. The Giants did this often enough, but could not finish their good work where it counted. The Eagles' tactic was to use Neville Jetta and Shannon Hurn to kick long out of defense. This quick transition of play left their tall forwards in one-on-one duels, where they used their height advantage. Jack Darling (4 goals) and Oscar Allen (3), playing his fourth game, combined well to take 11 marks between them. Jeremy Cameron booted 3 goals for the Giants but they missed the scoring venom offered by the injured Toby Greene and the midfield class of Josh Kelly. The Giants no longer have the deep talent pool of previous seasons. In contrast the Eagles appear to have plenty of depth and, on paper, are perhaps a better team than last year. Provided they can stay focused, the Eagles will be contenders to play deep into the September finals. The Giants will have to hope they can get their best 22 on the field.

Next week the Eagles travel to the MCG for a Grand Final replay with the Collingwood Magpies. The Giants return home to meet the Richmond Tigers.