Shane Mumford To The Rescue 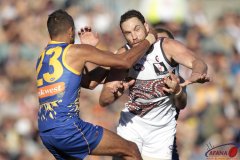 There is a young footy player in Bendigo, a town in central Victoria about 93 miles northwest of Melbourne. Nothing unusual about that as many young teens play for local clubs. However, 13 year old Bradman Thompson ran into a problem when he went through a growth spurt and shot up to 6'4" since last year. So much so, he could not find a pair of footy socks that would fit and the club he plays for is very strict about team uniforms right down to the socks - no variations.

The club, which uses the colors or the GWS Giants, did not have size 15 socks and Bradman's (named for legendary cricketer Don Bradman) parents could not find any in his size in stores or online.

Brad was crushed, thinking he would be unable to line up with his teammates in 2019. He is a sports fanatic and footy is his favorite. His Dad Matt said Brad would struggle for five minutes or more trying to get just one undersized sock over his foot and up his leg. Brad's story was featured on an episode of Australia's Current Affair and help was on the way.

GWS Giant ruckman Shane Mumford saw the story and was sympathetic,"...my mum and dad had a bit of trouble trying to find me footy boots, so I know how he feels", said Mumford. He hit the GWS property room and found four pair of socks and two pair of footy boots and sent them to Brad. He also sent a video message, "Just want to wish you all the best for the year. Keep using your size to your advantage. Good work mate."