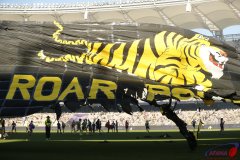 Richmond started strongly by making strong forward incursions that had the Fremantle defenders immediately under pressure. When the ball hit the ground the Tigers pounced and were stronger in the packs. In the first ten minutes of play, the first four goals to Shai Bolton, Brandon Ellis, Bolton (again) and Kane Lambert all came from contested ground balls as their small players stormed into attack.

The Dockers first goals came from their big men, Rory Lobb and Jesse Hogan as the home team settled and controlled the ball for the remainder of the first quarter. Fremantle’s third goal resulted from Richmond’s experienced ruckman, Toby Nankervis. Fremantle’s captain Nat Fyfe was awarded a free kick in the center of the ground and Nankervis did not give the ball quickly enough to Fyfe, and was penalized 50 meters. Nankervis held onto the ball as they moved forward, instead of giving it to Fyfe. He was subsequently penalized another 50 meters which brought Fyfe to the goal square where he kicked truly.

The Dockers evened the score early in the second quarter with a goal by small forward Sam Switkowski. The game then became into a dour struggle of the defenses until Tom Lynch took a big mark in attack for the Tigers and booted a drought-breaking goal at the 24-minute mark. With just 30 seconds on the clock before half time, Nathan Broad marked and kicked truly to give the Tigers some valuable breathing space. Although in the lead, the Tigers looked vulnerable with both Nankervis and Jack Ross injured.

Brandon Matera lit up the Dockers with a good left foot snap soon after the third quarter got underway. The Tigers were undermanned and under siege. Rory Lobb was dominating the ruck and the Dockers were winning clearances and contested possessions. Fyfe was a dominant force around the ground and won 21 contested possessions as he muscled his team forward. But when cornered, tigers are at their most dangerous; and the Richmond Tigers are no exception.

Their small players, Dustin Martin, Dion Prestia, Brandon Ellis and Kane Lambert swarmed into the contest and out-teamed the Dockers. With intuitive tap-ons and quick hand passes, the Tigers cut through the Docker’s midfield to catch the taller Docker defenders out of position.

Bacha Houli gave the Tigers plenty of run from defense and Jason Castagna typified the Tigers’ approach when he took on Adam Cerra near the forward pocket boundary line. With a spurt of pure speed, he burnt off Cerra to register the Tigers’ fourth for the quarter. The procession of Richmond goals was eventually stopped by David Mundy, who cleared the ball from the next center bounce and ran into attack to receive a hand pass and kick truly. The last ten minutes of the third quarter slowed to an arm wrestle as the Dockers attacked but were off line. The Tigers’ pressure and tackling was a feature of their game and forced the young Dockers into panicked errors.

Fittingly, a mistake in defense by Ryan Nhuis and Luke Ryan gifted Richmond the first goal of the final quarter and sealed the game for the Tigers. Dustin Martin then made sure of victory by booting a long goal from 50 meters. The Dockers fought the game out until the very end, and booted the last three goals to bring some respectability back to their score line; but they were never really in the hunt after the Tigers’ devastating third term. Richmond made much better use of the ball than the home team, who committed themselves fully, but were simply outclassed by Richmond’s running game. The Tigers have found some of the form that saw them win the 2017 premiership.

Next week, the Tigers meet Hawthorn at the MCG. The Hawks have also rediscovered some form and the Tigers will test them. The Dockers travel to Marvel Stadium to challenge the Essendon Bombers. A loss for the Dockers will see them drop out of the top eight. A loss for Bombers will virtually end their season.