Pies Pip Eagles By One Point 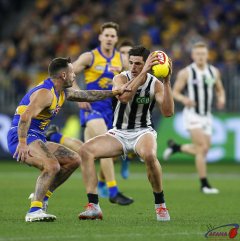 In a pulsating Grand Final replay at the home of the reigning Premiers, the undermanned Collingwood Magpies beat the West Coast Eagles by a solitary point. It was a tough win that steadies the Pies' hope of a top two finish. Spectators were treated to an enthralling exhibition of tough competitive football between two of the league's leading teams, where neither side was prepared to surrender.

The first quarter opened with classic attacking football from both sides. A West Coast goal within the first minute had its genesis at the opening bounced down, where Nic Naitanui tapped to Andrew Gaff who kicked to Luke Shuey, who kicked to Jack Darling, who took a strong mark (caught the ball) and kicked accurately from a set shot.

Collingwood replied four minutes later when Mihocek cleverly centered the ball to Tom Phillips who kicked truly. The teams traded goals for the rest of the quarter Jarrod Cameron booting three for the Eagles and Mihocek booting two and assisting in two others. Tackling pressure in the midfield or defense caused both teams to turn the ball over. Both teams worked the ball wide to give their midfielders space to move and time to pick targets in the forward line.

West Coast played their characteristic brand of football, where they concentrated on moving the ball by foot and retaining possession by players marking the ball. They launched most of their attacks down the boundary lines, with quick ball movement, once an opening into attack was found. Josh Kennedy could not get into the game but Jack Darling was a dominant force in the air up forward for the Eagles.

Collingwood on the other hand, relied on running the ball out of defense, using handpasses to work their way through the Eagles' defensive midfield web. The two contrasting styles finished with the same result. The last kicker in the chain picked his marking target carefully, which made life difficult for the respective defenders.

The Eagles' ruck combination of Naitanui and Tom Hickey had a slight edge over Brodie Grundy but the Pies broke even in clearances which meant no side could get a clear break on the scoreboard. The big American, Mason Cox, troubled the Eagle defenders with his height. He took some good contested marks but then dropped some he should have held. Cox began well with two goals in the first quarter and then a thirds mid-way through the second quarter. The highlight of the second quarter was a high mark by Liam Ryan in the goal square, which he converted to a goal with his set shot. Goals dried up in the last half of the second quarter as Collingwood attacked and the obdurate Eagles defended with and dogged determination.

The third quarter offered more of the same. Mihocek kicked his third and then Darling and Eliott Yeo helped each other to kick one each for the Eagles. No more goals were kicked after the ten-minute mark as defenses both held sway. Nic Naitanu, was a force of nature at bounce downs. If he wasn't winning taps he was following up when the ball hit the ground and winning clearances.  Grundy was not as dominant at bounce downs as Naitanui but he took more marks around the ground.  Steele Sidebottom and Adam Treloar won more than their fair share of contested possessions, a game high of fourteen and sixteen respectively, while Shannon Hurn and Luke Shuey won ten contested possessions each for the Eagles. Scott Pendlebury was typically effective when he had the ball in hand for Collingwood and always seemed to have more time than those around him.  Jack Redden found plenty of midfield ball for the Eagles and was well supported by Andrew Gaff and Dom Sheed.

The Pies wanted the ball more than the Eagles did in the last quarter. They were first to the ball and the Eagles were chasing. With Naitanui off the ground for most of the quarter, Grundy got on top in the ruck and Collingwood won more ground balls. The visitors finally broke through with Mihocek marking and booting his fourth goal after thirteen minutes of ferocious play. A minute later Jordan De Goey used a classy check-side kick to goal and bring Collingwood within one point of the Eagles. With 11 minutes to play James Aish leveled the score with a behind (worth 1 point). Then Ben Croker, who had played a terrible game, put the Pies in front by a point. A Grundy snap also scored a behind and the Pies were up by two points with five minutes on the clock. With two minutes left, Jack Darling marked on the boundary 45 meters from goal. His kick fell short and it was forced through to register a behind. It was the Eagles first score since the 10-minute mark of the third quarter.) It brought them within a point iof the visitors. However, Collingwood weren't going to let this game slip. They held on for the final two minutes to prevent another Eagle attack. Their desperation won the game.