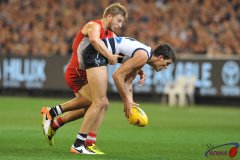 Swans coach John Longmire said Jack left his mark at Sydney, “Kieren Jack’s story as a trailblazer for the code in this state cannot be underestimated. It would be reasonable to say that Kieren’s journey has done as much for the code’s development ... as any person ... “He leaves the game ... highly respected inside and outside the code ...the kid ... had a few doubters when he first turned up at the end of 2005 ... what couldn’t immediately be seen was the incredible determination ... and the amazing mix of speed and endurance ... Kieren’s thirst for hard work was insatiable. He soaked up every bit of help ... and turned himself into one of the most elite two-way runners of his generation. A fierce competitor, he took on the best players the game ... and ... made himself one of the game’s best ... Kieren has passed on his knowledge and invested heavily in our younger players, his legacy at this club will be long lasting.”