Another Son Of A Gun For Essendon 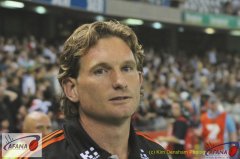 James Hird As a Coach

There are family names which are synonymous with clubs: Shaw and Rose at Collingwood, Cordner at Melbourne, Silvagni at Carlton; not at all unusual in the AFL. It includes the Hird name at Essendon. The Bombers are continuing that tradition with the signing of Tom Hird, son of former champion player and coach James Hird. Tom Hird, 19, will be the fourth generation of the Hird family to wear the red and black. Great-grandfather Allan Sr and grandfather Allan Jr also played for Essendon. Tom, who trained with the Bombers in 2019, has been signed as a Category B rookie on a two year contract. This is a first in VFL/FL history. While there are plenty of siblings, father and son combinations, and even grandfather, son and grandson combinations, this is the first fourth generation of a family name at the same club.

According to Tim Watson (a former Bomber), on SEN Radio, young Hird stepped away from football after the Essendon saga with ASADA and WADA, in which his father was heavily involved. He turned to soccer and had recently trialed for a soccer team in the Netherlands. However, this did not stop club recruiters from following him in case he decided to return to football. Recruiting manager Adrian Dodoro described Hird as an athletic sportsman with natural talent but added the club would take a "... patient approach with his development as he begins to build his strength."