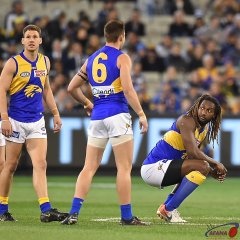 The two Western Australian teams, Fremantle and West Coast, are close to announcing temporary bases in the Gold Coast area of Queensland.  Both clubs had resigned themselves to playing in an eastern "hub" as the Western Australian government refused to lower its closed border for AFL teams, despite the state having very low numbers of cases of COVID-19. Western Australia has relaxed its COVID-19 lockdown and now allows twenty people to gather in one place. However, the Eagles and Dockers are bound by AFL restrictions that require all teams to have the same regime of preparation at the moment. This means that players must train in pairs even if their own state allows for more players to train together. It has been suggested that the Eagles and Dockers could play a Western derby in Perth before heading east.

The irony of the current AFL situation is that both South Australia and Western Australia have had no evidence of community transmission of COVID-19 in their states for the past two weeks. Both states have a mere handful of people identified with virus, and those patients are in isolation. Victoria, where the AFL wants teams to play, is recording new cases of the disease on a daily basis.The AFL's preferred option is to have a fly-in/fly-out competition, but with both South Australia and Western Australia keeping their respective borders closed, a hub on the east coast seems a preferable option for the four affected clubs, rather than the league setting up hubs in either South or Western Australia.

The AFL has the goal of a Grand Final at the end of October. With Round 1 already completed, the AFL will need to squeeze in 144 games plus finals before the October 31st. It is expected that games will consist of shortened 16 minute quarters. Interchange benches may be extended to reduce the load on players who may, on occasions, play three games within a fortnight. Further AFL announcements are expected Thursday May 14th (AEST). (Ed. note: The AFLW declared their season over without finals early on in the crisis. Coverage on Fox Networks in the US and TSN networks in Canada is expected to resume with live matches once the season is restarted.)