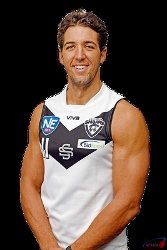 Aurrichio, a former soccer, baseball, and basketball player from Columbia University, was a member of New York's team which won a title in 2014 at the USAFL National Tournament. That same year, he tested at a combine held in Los Angeles. In 2015, he traveled to Australia to join Carlton's VFL affiliate the Northern Blues. He failed to make it onto an AFL list but continued playing in the VFL. He later played some games for South Adelaide in the South Australian National Football League (SANFL) before moving north to join Northern Territory Football League (NTFL) club Waratah in Darwin. He worked tirelessly on his fitness and skills to become the best player he could. He recently had a chance to work with former Port Adelaide coach Matthew Primus (now coaching the Southport Sharks in Queensland) but that fell through when the pandemic hit.

Many of his teammates and former teammates described him as a real "larrikin" and character.  In 2015, he was interviewed for the AF website, afl.com.au. In that interview, he said he tried surrounding himself with all manner of footy people since his arrival in Melbourne. Eventually, he was introduced to former Essendon champion Terry Daniher by then-housemate and another former New York Magpie Joel Daniher. He had some workouts with Terry and was even invited to the Daniher home for a Christmas dinner.

Of Daniher and the training sessions, he said, "... he's been putting me through my paces, kicking my b*tt ... He's a real hard-nosed dude, but in a good way. He demands excellence. He just says never stop running. It's all active, always talking, and keep your hands going. To learn off a guy of that stature, you just take everything in."

He also learned about Daniher's illustrious career but also saw Daniher's sense of humor, "Christmas dinner was just a real riot. It was non-stop laughter … so I kind of fit right in cracking jokes and telling stories ... at one point Terry said 'here, I've got you a gift'. "I turned around and it's the Daniher's book about the four boys (Terry, Anthony, Neale, and Chris). So I've picked that up and I'm getting all the stories."

He also told the AFL website that the doubters who did not believe he could make it only increased his determination and drive. He knew it would take time and a lot of work but he believed in himself. He picked up the nickname "Rooch", He was hoping someone would come up with something better, but he ended up being stuck with Rooch. At 6'6" and 220 pounds, was a big man and he had a personality to match according to family, friends, and anyone who knew or met him. All say he made a huge impact no matter where he was or what he was doing.

Tributes came from everywhere. His father Lou described his son as just a happy guy who "... put everything he had into the pursuit of his dreams.” He also said, “The bigger the challenge, the harder he worked ... He believed nothing worth fighting for is easy. He truly felt there was no challenge too big ... He loved Australia.”

His mother Jill, a New York nurse who has been working tirelessly during the pandemic, said her son made quite the impression when he was born, weighing 13 pounds, nine ounces. She said her husband did not want to name him Alexander but it was a done deal when several nurses at the hospital made a big banner "Alexander the Great".

Older brother Michael remembered going scuba diving with Alex along the Great Barrier Reef. At first, he was a bit scared about going in at night but Alex calmed him down and they went accompanied by an instructor who told them to stay close and not go too deep, "... my brother was fearless and pushed the limits ... At night all you see is sharks and he would swim right up to them and they’d swim away. I did things I would have never done, but he gave me the courage to do them.”

High school soccer coach Doug Gannon said, "He was the best to ever walk through the halls of our school ... He was a true captain and the ultimate team player. He wanted everyone to be happy ... and loved life to the fullest. I spoke with him last week and he was having so much fun on the coast of Australia enjoying life.” Brother Chris remembered how Alex adopted the team mantra of "Find A Way" as his own. Baseball coach Bill Mitaritonna called him “the greatest competitor I’ve coached ... It didn’t matter if it were ... basketball ... Ping-Pong, he just wanted to compete and win ... ". NBA star Tobias Harris and former schoolmate tweeted, " ...  one of the greatest human beings I’ve come across ... I’ve lost a friend that I will forever miss.”

Columbia soccer coach Kevin Anderson said, “Alex’s love and passion for Columbia men’s soccer and his teammates was second to none ... When he walked into a room you knew it, and he made you feel it deep into your soul. His personality and smile were even larger than he was. He was a guy who always looked to grow, challenged himself, held guys accountable and only played to win while truly enjoying the challenge and opportunity ... ".

Waratah club president Rohan Langworthy said, "Rooch ... made an instant impact, with his strong play on the field, and even stronger character off the field, and quickly became a favorite at Waratahs. He had recently discussed moving to Darwin permanently and was immersing himself in the lifestyle ... he ... clearly touched all who met him, with everyone in disbelief that we have lost such a loveable larrakin ... ".

Southport NEAFL co-captain Andrew Boston said the players were devastated upon hearing the news, "... When he first came to the club you could see he was a big man with a strong voice but everyone gravitated to him. He is a bloke everyone wanted to be around. “His training standards ... were elite. He was the best trainer ... and everyone strived to match how professional he was. He was one of the best clubmen at the Southport Sharks. He got around every single player and everyone came to him for advice. He leaves a massive hole ...  It’s a tough loss in football but even bigger loss because we are a family at Southport and it feels like we have all just lost a brother.” Sharks coach Stephen Daniel said Aurrichio was a man of “outstanding character ... From the day I met Alex, his character was evident You could see his love of the game ... and his big personality. Everyone who met him fell in love with him ... ".

Aurricho was planning to move to the Gold Coast to join the Broadbeach Cats. He also had a job lined up in construction with Broadbeach coach Craig O'Brien's company. O’Brien said the Broadbeach players, who played with Aurrichio when he wasn’t selected for the Sharks NEAFL team, were rattled, “... an absolute tragedy. He was such a good guy who was professional but carefree off the field. When he was around the place had a different vibe. Even before games, he would say something funny to break the tension ... He was very quick-witted.”

A GoFundMe page was set up by former AFLW player Abbey Holmes. Within 24 hours, the “Lets Get Rooch home” page raised more than $110,500. Holmes wrote, “Let’s give Rooch the send-off he deserves, and get him home ... We are all absolutely shattered. The tragic passing of Alex has left a gaping hole in or hearts. Rooch came to Australia chasing the adventure of a lifetime and my gosh did he live large!”