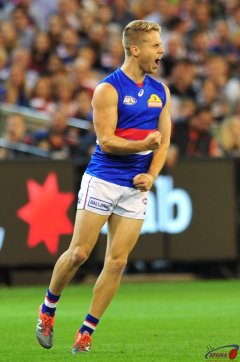 The game was played in fine conditions which allowed both teams to play their regular styles of football. The Dockers's style of retaining possession of the ball by short kicking and switching play across the field to open up scoring opportunities, eventually fell away as uncharacteristic mis-kicks and fumbles opened opportunities for the Bulldog runners to swoop. The Dogs focussed on numbers at the ball and running in waves forward, once they gained possession and used slick handpassing to sweep past defenders.The first goal of the match came when Luke Darcy grabbed the ball in a ruck contest and snapped truly to give the Dockers and early lead. Darcy had the better of interesting duel with fellow tyro Tim English; although, English booted two goals to Darcy's 1 goal and 1 behind (each behind is worth a point). The Dogs responded a minute later with a quick clearance from the center bounce and a clever soccer-style half volley by Mitch Wallis. At the twenty minute mark, Jason Johannisen completed a clever snap to put the Dogs a goal ahead before Docker small forward Lachie Schulz received a handpass from Liam Henry and kicked truly, to have the Dockers down by just one point at quarter time.

Nat Fyfe put the Dockers back in front two minutes after the start of the second quarter. Fyfe's massive sixty-five meter bomb is the longest goal scored this year. This goal stirred the Dogs and they raised their intensity a notch. The Dogs harassed, tackled and smothered kicks to prevent the Dockers from setting up their possession game. A standout for the Dockers, apart from Fyfe, was Caleb Serong.  Serong's strong performance which will enhance his claims on the Rising Star award. But it was the combined pressure of the Bulldog midfielders which continually pushed the ball forward, to have the Docker defense under siege. English marked near goals and his kick put the Dogs back in front. A minute later when the Bulldogs pushed forward again, Naughton read the ball off hands and snapped truly. Two minutes later Fyfe marked and booted his second to drag the Dockers back into the contest and level the scores. The Dogs maintained their pressure and set up more scoring opportunities with Josh Bruce, Patrick Lipinski and English all booting goals. Near the end of the quarter, Docker forward Mitch Crowden, who had been playing a lock-down role on Caleb Daniel, got creative to mark and kick a long goal and bring the Dockers within touching distance at the main break.

Jesse Hogan marked and goaled early in the third quarter to challenge the Dogs' intent. The Dogs responded four minutes later through a good snap by Bailey Smith; but they were unable to add to their total for the rest of the quarter. The Docker defense led by Luke Ryan remained virtually impassable. In the midfield, Lachie Hunter and Tom  Liberatore won contests for the Dogs, but their lead only increased by one point during the second half of the quarter. Despite their ferocious pressure on the ball, the Dogs went from the six-minute mark of the third quarter to the 10-minute mark of the final quarter without booting a major. A mark and goal by Hunter broke the drought, which was followed up by Caleb Daniel swooping on a loose ball and kicking truly to scuttle the Dockers. Jesse Hogan and Liam Henry then missed two gettable shots for the Dockers, before Marcus Bontempelli booted the last goal of the match for the Bulldogs.

The win was enough to guarantee the Bulldogs a place in the final series. The undermanned Dockers' season finished with a loss, but not a loss of respect. The young team is expected to continue to improve next year, and with a full roster of fit players, should be one of the teams to feature in next year's finals. The Bulldogs' final position of the on the ladder is dependent on whether Port Adelaide beat Collingwood. If Collingwood lose, the Dogs will stay in seventh place and meet the St Kilda Saints in the first week of the final series.