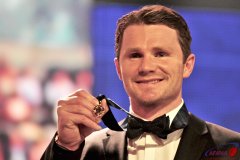 This year, due to the pandemic, the Grand Final is scheduled for the Gabba in Brisbane, which holds less than one-third the capacity of the MCG. Many AFL clubs have played games at the Gabba due to the quarantine hubs and concerns about COVID in Victoria. Each year, all clubs are allotted a certain number of Grand Final tickets which are then distributed to players, corporates and supporters. This year, many players will donate their allotted tickets to community clubs in Queensland. Over 150 clubs in Queensland will receive two tickets each. The clubs will then give the tickets to "long-standing" volunteers or fans who are struggling due to the pandemic.

AFLPA president Patrick Dangerfield thinks it is the least the clubs can do for the state since it helped the competition continue this year, “It’s been tough for a lot of players to be away from home for so much of the year. But it’s been made easier thanks to the local fans who have brought their energy and voices to the matches ... We know the tickets will go to deserving supporters who have done so much to grow our game in Queensland.”

AFL boss Gillon McLachlan and the AFL claim the game has grown considerably at a local level in Queensland as a result of the state hosting more matches , "I wanted to say thank you to the Queensland football community ... Footy in Queensland is going from strength to strength and it is testament to the passion of the players, coaches and volunteers who love their local clubs. We are hoping with this fantastic gesture from the ... playing group that local Queensland clubs can show appreciation to their long-standing volunteers or even use the tickets to raise some funds.”