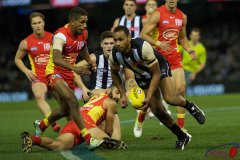 Minchington was signed as a rookie during the SSP but played only four games for the Hawks. Golds was drafted as a rookie in 2019 and again for the 2020 season but never made his senior debut. Ross was drafted in 2017  but never played a senior game. He was a member of Hawthorn's 2018 VFL premiership side.

Just after their Semi-Final losses, Coliingwood's Travis Varcoe and Saint Nathan Brown announced their retirements. He had actually informed the club and teammates ahead of the game. Varcoe was a top draft pick by Geelong in 2005. Varcoe, 32, played 138 games for the Cats, including the 2009 and 2011 premierships. He was part of a three-way trade at the end of 2014 which saw him land at Collingwood, Heritier Lumumba go to Melbourne and Mitch Clark to Geelong. He played a further 92 matches for the Magpies. He represented the Indigenous All-Stars in 2009 and played in the 2010 International Rules Series.

Varcoe said, “I’ve run my race. I don’t have another season left in the tank. I leave feeling very fortunate and thankful for all that two wonderful clubs, Geelong and Collingwood, did for me and my family. I hope I was able to give something back ... As a footballer, you don’t do it alone on or off the field.”

Collingwood GM Geoff Walsh said, "... At his best, Trav was a dynamic player who could hunt opponent or ball with real intent. He was what we needed when he joined us and he has never stopped being a solid member of the group ...".

At the end of July, St Kilda defender Nathan Brown left the quarantine hub and returned to Victoria. He admitted that his career was over with Coach Bratt Ratten preferring Jake Carlisle, Callum Wilkie and Dougal Howard in the key defensive positions. Brown, 31, played 130 games with Collingwood including the 2010 premiership before being signed by St Kilda as a delisted free agent at the end of 2016. He played a further 53 games for the Saints.

Unable to face his former teammates before quietly leaving Queensland, he wrote an emotional letter which had many in tears. He first apologized for not facing them to break the news. He then said in part, "... I love this group way too much and it breaks my heart even writing this as I feel like I’ve deserted my brothers in the heat of the battle. So to look you all in the eye, it would have absolutely destroyed me. In November 2016 I became a Saint, and s*** I was nervous. I didn’t want to be a champion or a match winner, I wanted ... the unconditional love and respect of my teammates. I hope I have earned that even in the eyes of just one guy. You will all learn one day that having the respect of your teammates is the only thing that matters. You get that, and you will be fulfilled. 2020 ... You completely ruined my farewell tour ... if I truly had to pick a time to go it would be exactly like this: To be a part of a new beginning for the St Kilda Football Club - a new identity, player-made and player-owned. It’s one of brotherhood, blood sweat and tears, freedom and love ... That is the team I’m proud to be a part of and that is a team I’m proud to leave ... To my boys, the players. I’ve had so much fun with you. As Blake (Acres) use to remind me daily, I came to the club as an old vet and you all embraced me like a young fella ... The love you all showed for my girls means the world to me, and the acceptance and mostly patience you showed to put up with the ‘old dog’ winding back the clock several times on nights out, I will never forget it ... I love you all! ... as hard as it may get ... please don’t give up and stay together. It’s worth it. When the crowds are gone, and the lights are off, and it’s just you guys ... in the middle of the ground arm in arm, looking each other in the eye with the cup in the middle, it will be worth everything. That’s the moment you are after. To the staff, you are as much a part of this team as the players ... Footy is bloody tough, and to have you guys in my corner, I am forever grateful. It’s been a tough 12 months, and to be able to talk to you guys with an open heart, well, words can’t describe what that has meant to me. Go the phys-edders you mad b-sta-rds you. I will leave you with this: ... life and footy go hand in hand; life is ultimately about a journey towards happiness. The beauty about happiness is that it comes in many forms ... The most important part ... is the journey itself, most people strive for happiness but become disheartened or frustrated when they don’t achieve things, feel like cr*p ... But when these same people get to the end of their lives, they nearly always say they are so proud of who they are because of what they overcame ... They look back on all the hard things ... and say I love those moments, I cherish those moments, those were the times I felt most alive, I had to fight for what I believed in and what I loved. They made me who I am. If there was the single most important piece advice, I can give to you, it’s this: Embrace everything you do ... don’t get disheartened. Experiences are what shape you and what make you grow as a person. Learn from them, learn from people who have had a lot of them, and use them to guide you ... Find your values and use them to keep you grounded and on task when you lose your way, but keep growing and adapting to whatever life throws at you and I guarantee you at the end, you will be proud. A long-time friend and mentor of mine ... taught me this ... how to be resilient, to pick myself up from the setbacks and to never give up. Embrace your journey no matter what it looks like. He taught me about love, love and respect your opportunities, be grateful for the little things and never forget your family and friends because when things get tough, they will be the ones to have your back ... lastly, he taught me to be passionate. Don’t be afraid to wear your heart on your sleeve ... be authentic ... Be proud of who you are. It’s the right time for me now to give what I have given football for the past 14 years to my other team – my girls ... That’s all I have boys, I’ve corrupted you enough. I look forward to seeing you guys live out your dreams whatever they may look like and after this is all said and done, let’s have a couple of cold beers, or maybe one last footy trip. Nath."

St Kilda has delisted Doulton Langlands, Ryan Abbott, Jack Bell, Jack Mayo and Logan Austin. Austin played 18 AFL games, including seven with the Saints after being traded from Port Adelaide at the end of the 2017 season. Abbott was drafted by Geelong in 2016 and played just five games. He was delisted at the end of 2019 with the promise that he would be redrafted as a rookie if no other club came along. St Kilda signed him as a delisted free agent but he played just one game for the Saints. Langlands was drafted as a rookie in 2017 and played thee games. Mayo was selected om the 2019 midseason draft while Bell was taken in the 2019 Rookie draft. Neither ever played a senior game.