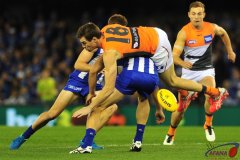 Cameron vs the Kangaroos

In October, GWS forward Jeremy Cameron told the club he wanted to explore his options as a restricted free agent. Cameron has played 171 games for the club since joining as a 17-year old in 2010. In 2020 he played 17 games and kicked 24 goals. Cameron has named Geelong as his preferred club.

General Manager Football Jason McCartney said: “We are disappointed by this news, having tabled what we believe to have been a suitable offer to retain Jeremy. With Jeremy being a restricted free agent, we have a number of avenues to now explore to get the best possible outcome ... ".

Midfielder Jye Caldwell has also requested a trade to return to Victoria. He has been linked to Essendon and St Kilda but has named Essendon as his preferred destination. The out of contract Caldwell was drafted in 2018 and played 11 games. McCartney said the club had offered Caldwell a two year deal but it is believed Essendon is willing to offer a four year contract.

Adelaide midfielder Brad Crouch and defender Kyle Hartigan have told the club they want to explore their options as restricted free agents. Crouch, a restricted free agent, was drafted in 2011 and has played 95 games. He nominated the Saints as his preferred destination. Hartigan, an unrestricted free agent, was a mature age recruit in the 2012 rookie draft and has played 113 games. He appears set to join Hawthorn. With James Sicily on the long-term injury list and James Frawley retiring, the Hawks will look to Hartigan to bolster their defense and free up Ben McEvoy for more ruck time.

Essendon small Essendon forward Orazio Fantasia, 5, has told the club he wants to be traded to Port Adelaide to be closer to home and family. Fantasia, with one year to run on his contract, initially wanted to be traded last year, but did a 180 and remained with the Bombers. Both Port and the Crows met with Fantasia in early October, but his preference is Port. Fantasia shares a close bond with Power assistant Nathan Bassett who coached him to a SANFL premiership in 2013. He is also a friend of former Norwood teammate Tom Jonas with whom he often plays golf. Fantasia played just five games in 2020 due to injuries. He is the third Bomber to request a trade with Joe Daniher saying he wants to go to Brisbane and Adam Saad telling the club he wants to cross to Carlton.