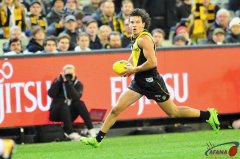 There is a huge Rioli contingent in the Northern Territory with nineteen Riolis playing senior football across four generations. Five have gone on to play AFL football starting with Maurice Sr. Following were Cyril, Dean, Willie and Daniel. Another relative, Danielle Ponter, plays for the Adelaide Crows in the AFLW. Ben said the milestone game meant a lot to his family and that it was something special, especially lining up with other family members. He joked that with so many cousins looking on, he had to do well or he would "cop it" from his family. That just fueled his determination to win. The 1000th game was also a win with each of the three Riolis kicking a goal. Shannon's goal gave him bragging rights as the leading goal kicker of the family, taking the title from his Uncle Willie.

Shannon also designed the commutative jumpers for the occasion and told of the meanings which incorporated the family's dreaming, "The yellow depicts Air Force Creek, which is near our country on the Islands. Then on the turtle shell there are four plates going down the middle which represent the four generations of the Riolis who have played at the club."

Of course, it was Maurice Sr who started it all first with St Mary's, then to South Fremantle and finally to Richmond. He led South Fremantle to the 1980 premiership before crossing to Richmond where he won two best and fairest awards and became the first indigenous player to win the Norm Smith Medal in 1982. It was an era when few indigenous players played VFL and racism was rampant. He could be considered somewhat of a trailblazer for other indigenous players. After he retired, he returned to the NT and entered politics.

Nephew Cyril won the Norm Smith Medal in 2015. An interesting fact is that every AFL team with a Rioli in their ranks has won a premiership. Maurice Jr coud follow in dad's footsteps as he is eligible under the father son rule for both Fremantle (Maurice Sr played 168 games with South Fremantle) and Richmond (118 games) After his four-goal performance in the preliminary final, other AFL clubs have taken notice.

Maurice Jr supports the Tigers but several issues face the club before they can snare him. Under the current rules, all clubs can "bid" on him with draft selections. It would then be up to both Fremantle and Richmond to better those bids. The Tigers already have a plethora of small forwards in Dan Rioli, Jason Castagna, Shai Bolton, Jack Higgins and Jake Aarts. Dan Butler, another small forward and a member of the 2017 premiership, was traded to St Kilda while Liam Baker has been relegated to defense.

Maurice Jr has already said he wants to join the Tigers. He does not lack talent. He's got speed, has an innate sense for goals, can do the freakish "something out of nothing" and can apply plenty of tackling pressure in the forward line. The Tigers are renowned of late for selecting the type of talent that young Rioli possesses.