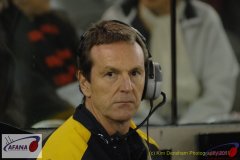 He initially joined Richmond as club doctor in 1976 and was with the Tigers until 1979. When Kevin Sheedy was appointed Essendon coach in 1981, Reid and his Richmond colleague Dr Ian Reynolds crossed to the Bombers in 1982. Reid would remain for 39 years. Not only did he treat the players while they were at the club, he also treated them long after their careers were finished and was also a good friend to many of them.

He was the team doctor for four International Rules teams between 1987 and 2006 and three Victorian teams as well as serving as the secretary of the AFL Medical Officers Association. In 2009 he was awarded an AFL Lifetime Achievement Award. In 2010, both he and Reynolds won the Jack Titus Medal for their services to the game. Reid was inducted into the Essendon Hall of Fame in 2014. The club plans to elevate him to Legend status along with Dustin Fletcher, Gavin Wanganeen and Neale Daniher.

President Paul Brasher said the club and the League had lost one of the game’s most popular, respected and well-loved characters, “Today we mourn the passing of our longest-serving club doctor Bruce Reid ... “He was a loyal, dedicated and widely loved member of our club and his impact was vast. He was the League’s longest-serving doctor and ... proudly ours ... he was a friend and confidant to many generations of players and their families."

CEO Xavier Campbell said, “Bruce was a true champion within our football club. He meant more than he could have ever imagined to so many and he will be sorely missed within the Essendon family and broader community. Bruce’s legacy and impact cannot be measured. His years of service were significant. But his care, compassion, humor and positivity can never be replaced. He was a confidant and true friend to so many ... Reid’s lifelong service to the Bombers, the AFL and the game in general has been exceptional, and he’ll be dearly missed."