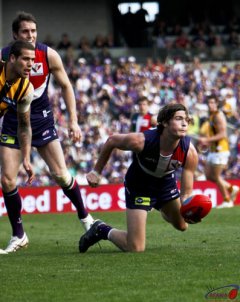 In making the announcement,  Roberton said, "I've come to a point where I need to put my family and future first. Football has been a huge part of my life for such a long time and I've never lost my passion for the game. But after lengthy discussions with my family and on the advice of my doctors, I've made the extremely hard decision to hang up the boots."

St Kilda Coach Brett Ratten said the club would continue to support Roberton, "Dylan is a much-loved and well-respected member of our club. He should be really proud of how he has dealt with everything life has thrown at him - it's a real credit to his character. Dylan has a great footy brain and he'll remain an asset to our program for the remainder of 2021."

Roberton was originally drafted by Fremantle in 2009 and played 37 games before being delisted at the end of 2012. The Saints signed him as an unrestricted free agent. The defender played 92 games for the Saints.
In 2017, he was runner up in the Saints best and fairest count and was a nominee for All-Australian.