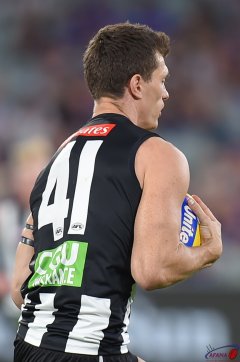 The rain continued in the second quarter and the pies showed how to handle the wet with Jamie Elliott kicking to Mihocek, who scored his second goal at the five-minute mark. The Dockers had control of the ball for much of the second quarter, but the Magpies booted three goals while denying the Dockers any major scores. When it mattered, Collingwood showed cleaner ball skills in front of goals while the Dockers fiddled and overused the ball in their attempt to set up attacks. Collingwood pushed the Dockers wide by denying them the central corridor forcing the Dockers to take the long way to goal. When Collingwood got the ball they used a no-fuss style of pushing the ball in a straight line and relying on players up forward to win their contests. It wasn't pretty but it was highly effective in the wet.

The third quarter was a more even struggle with Collingwood matching the Dockers in clearances, even though Sean Darcy dominated in the ruck for the Dockers, after the big American Mason Cox retired from the game with an injured finger. Collingwood played their wingers Steele Sidebottom and Josh Daicos on the defensive side of stoppages which proved more effective than the Docker tactic of allowing their wingers, Blake Acres and Jordan Clark, to operate in close to the ball. When the Dockers won clearances, they were frequently under pressure from Collingwood tacklers causing turnovers which were mopped up by Daicos and Sidebottom. The Magpies won the tackle count 89 to 60 which is indicative of the pressure and desperation the Magpies were able to apply throughout the game. Will Brodie was the Dockers' best on-ball player, winning a game high 11 clearances and he also snapped a goal for the Dockers in the third quarter, to keep them in the game. Collingwood's two goals for the quarter came from strong marks by Mihocek and Oliver Henry (who finished with four goals after being a late inclusion).

Collingwood sealed the game early in the last quarter after Michael Walters brought the Dockers within three goals. Henry booted two and Jack Ginnivan also kicked truly to shut down the possibility of a Docker fightback. A goal from Docker veteran David Mundy was answered by Henry booting his fourth. Andrew Brayshaw received a fifty meter penalty to boot a consolation goal for the Dockers when the game was well and truly done.

Next week Collingwood return to the MCG to meet the Carlton Blues. The Dockers will play the powerful Melbourne Demons at the same venue, but a day earlier. The Dockers are likely to lose their third game in a row.