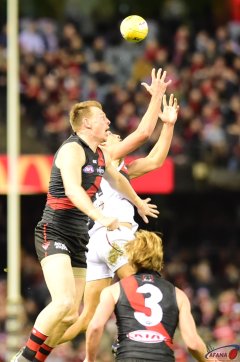 Shortly after the AFL Draft, the Rookie Draft was held. As with the AFL Draft, it is club by club and the selection number is first, followed by the player name, club or origin, height, weight and position. 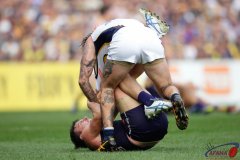 When the bottom team travels to play a team sitting in seventh position on its home turf it is generally a recipe for disaster. The Gold Coast Suns are a developing team with flashes of brilliance and two wins so far in their first season. The Fremantle Dockers wanted to celebrate the occasion of Captain Matthew Pavlich’s 250th game. “Pav” is acknowledged by many as the greatest player in the history of the Fremantle Football Club. Weather conditions were blustery, cold and wet – a rare combination in Perth, but perfect for Aussie Rules football.

Fremantle kept its Finals' hopes intact with a convincing win over the Brisbane Lions at Patersons Stadium in Round 14. The Dockers were without Michael Barlow who pulled up sore after his comeback game last week, but Alex Silvagni was back to add some muscle in defense. Brisbane had been doing well since the return of bruising full forward and captain Jonathon Brown, but had their worries without classy midfielder Drew Banfield in the team.

Burgoyne Free For Round One

In the second Elimination Final, the Hawthorn Hawks traveled west to take on the Fremantle Dockers. Paul Hasleby, who announced his retirement effective from the end of the season, was a surprise omission from the side.

A clash between the two top teams in any sport is guaranteed to get the fans out and the hype up. The Collingwood Magpies had the sit on top spot while their challengers, the Fremantle Dockers, were looking to take it away from them. In their 16 year history as a club the Dockers have never been on the top of the table, and this round was their best chance to change that statistic in front of 42,000 fans at Subiaco Oval.