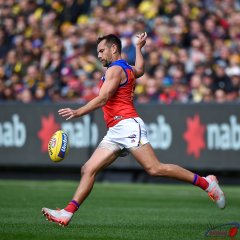 Hawthorn delisted Will Langford, Brendan Whitecross and Kieran Lovell. Langford played 72 games for the Hawks including the 2014 premiership but managed only six games in 2018. Whitecross, a life member of the Hawks, played 111 games since 2007 in an injury-plagued career. He did play in VFL team Box Hill's 2018 premiership team.

The Gold Coast Suns traveled to Perth to play a ‘home’ game at Optus Stadium. The Suns had won their first two games, against North Melbourne and Carlton, but found the Dockers a tougher proposition at the new Perth stadium.