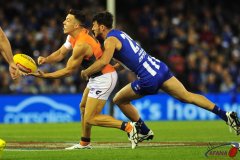 The clash between the Eagles and the Hawks at Domain Stadium was always going to be a game when one side suffered a setback. The Hawks were on top of the competition and needed to win to stay there. The Eagles were hoping to earn a highly valued home final. Something had to give.
Read more

The AFL National Draft was held November 21. While, as expected, junior star Tom Boyd was the number one selection, there were a few surprises.

Ahead of the late November draft, clubs made changes, delisting some and elevating others from the rookie list. Clubs must use a draft selection to elevate rookies.

Adelaide delisted Ian Callinan and Nick Joyce. Callinan, 30, was a mature age recruit to the rookie list and played 32 games for the Crows in three seasons. He was elevated o the senior list in 2012. Joyce, 20, was drafted at the end of 2011 but did not play an AFL game in two seasons. Also delisted were Richard Tambling, Aiden Riley, Ben Dowdell and rookies Tim McIntyre, Dylan Orval and Tim Klaosen.

The AFL preseason draft and rookie draft were held on December 11. Geelong and St Kilda were the only two clubs who did not participate. Player age, height, weight, draft selection and previous club are in parentheses.