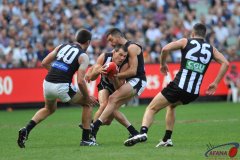 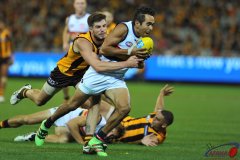 Club Record Finals: Jude Bolton (SYD) will play his 25th Finals match in the Semi Final, giving him the club record for most Finals games in the history of South Melbourne/Sydney.

500 goals: Matthew Pavlich (FREM), needed four goals to reach the milestone and did it in the dying minutes of the Dockers' match against Port Adelaide. It looked like he would be stranded on 499 when he came off the ground in the first term after suffering a knock to his knee, but he returned to finish out the game and be the first player in the club's history to kick 500 goals. He is also the 50th player in League history to kick 500 goals, a milestone within a milestone. Brisbane's Jonathan Brown and Saint Stephen Milne both kicked their 500th career goal earlier this season.

After looking at potential catalysts for Collingwood, Geelong, Hawthorn and West Coast in Part 1, AFANA turns its attention to the remaining four Finals' combatants, Sydney, Essendon, Carlton and St Kilda. Who are the “under the radar” players to watch out for as Week One of the Finals approaches?

Carlton effectively ended Fremantle’s Finals’ hopes in a comprehensive demolition at Patersons Stadium in Round 21. Fremantle had won the last 12 of 14 encounters with Carlton and got off to a great start winning the ball from the first bounce down. Aaron Sandilands was back after injury and tapped the ball down for a Matthew Pavlich clearance. Pavlich chased up his own kick to goal within the first 30 seconds of the game.

Mick Malthouse, fresh from coaching Collingwood to the 2010 AFL Premiership, had little or no time to relax afterward as he began preparations for the Australian team to play against Ireland in the International Rules Series.

Best And Fairest For Judd

One week after winning his second Brownlow Medal ahead of Geelong's Gary Ablett and Collingwood's Dane Swan, Chris Judd has won his third consecutive John Nicholls Medal as Carlton's best and fairest. Judd, who was presented with the medal by Nicholls, has won the medal every year since he joined the club.