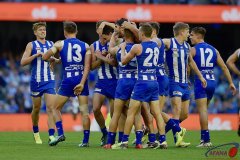 In Round 8, Richmond returned to the scene of last season’s 57 point Elimination Final debacle, determined to put up a better fight against a Port Adelaide team yet to find its best form in 2015. Although the game was to be a celebration of retiring Port legend Kane Cornes on his 300th and final game in front of a home crowd of more than 45,000 fans, it was the Tigers who burst out of the blocks early with a Jake Batchelor goal at the seven minute mark. Port players were being denied the space they crave for their free-running game as Richmond piled on the pressure with fierce tackling and an uncompromising attack on the ball. Jack Riewoldt found Brett Deledio right on the 50 meter arc at the 16 minute mark and Deledio did the rest, sending a towering kick through the goals to give Richmond a handy 19 point lead at quarter time. In a massive turnaround from when the teams last met, Port failed to kick a goal in the first quarter and the home fans grew restless with the slow start.

With the trade period soon to commence, several more clubs have announced changes to their lists.

Christian Howard, Tom Young and Brett Goodes have been delisted by the Western Bulldogs. Young was originally drafted by Collingwood and played nine games 2011-12 before being traded to the Bulldogs where he played a further 15 games. Goodes debuted in 2013 and played 15 games. He recently played in the Bulldogs VFL premiership win. Howard was drafted in 2009 but a hip injury wiped out the first half of 2010 and he spent the remainder of the year in the VFL. He debuted in 2011 and played six games. The young defender/wingman had an excellent preseason in 2012 before a knee injury sidelined him for six weeks. He came back to play 11 games. Named as an emergency six times, he managed only one game in 2013 and just seven more in 2014.