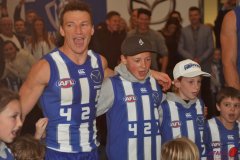 Coaches On The Move

Sacked Port coach Matthew Primus has landed a new job as an assistant with the Gold Coast. Primus, who played 157 games with Fitzroy and Port before coaching Port for two seasons, will work with the ruck men and midfield as well as working to help develop the tall key position players. General Manager Marcus Ashcroft