The difference between the two teams was Josh Kennedy, who thrived in the windy conditions to kick seven goals to stretch his lead at the top of the AFL goal kicking table.
Read more 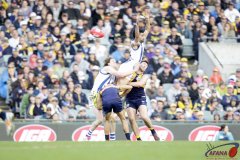