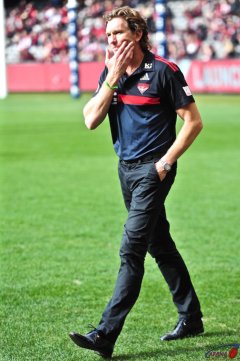 James Hird was known as the "Golden Boy" of the AFL - a moniker given him by the media - who could do no wrong. His only blemish was a fine for criticizing an umpire on "The Footy Show" after being badgered by co-host Sam Newman. He was always brilliant on the field, so much so that in the latter years of his playing career, then coach Kevin Sheedy gave him license to instruct teammates during a game. Sheedy once said at the time it was like having a coach out on the ground. Always a favorite son of the club and a third generation Bomber (both his grandfather and father played for Essendon), Hird was appointed senior coach at the end of 2010 after the club axed Matthew Knights.   Determined to elevate the team back to premiership contention after a dismal 2010 season, events saw former Geelong senior coach Mark Thompson return to the club as an assistant.
Read more

SYDNEY
Swan midfielder Nic Fosdike has been forced to retire due to ongoing knee problems which restricted him in 2008. Both Senior Coach Paul Roos and assistant coach John Longmire had nothing bur praise for the 10-year veteran, saying he gave 100% and always put the team first. Longmire, always impressed by his work ethic and ability to run out games, also said Fosdike always tried to get the best out of himself.