Submitted on Sun, 07/02/2017 - 10:21 AM EDT
The Saint Kilda Saints boosted their finals hopes by grinding out a determined four quarter effort to defeat the Fremantle Dockers. It was the first time in six attempts that the Saints have won at Domain Stadium and the win will give the Saints belief they have the goods to remain in the in the top eight.
Read more

There are some big movers in the AFANA power poll this week as upset wins continue across the league. In what looks to be the most even competition in years, predicting the top eight is becoming somewhat of a wild guess.

1.    Greater Western Sydney Giants (Last Week - 1)
For the second week in a row, the injury riddled Giants found a way to win despite being outplayed for most of the game by a Richmond team that seems to consistently find unique ways to lose. With plenty of talent to return to their list, the Giants will be hard to beat as the season progresses.
Read more

Submitted on Sun, 08/14/2016 - 9:34 AM EDT
The Adelaide Crows completely outclassed the Fremantle Dockers to register an emphatic win at Domain Stadium. Having earlier defeated the Eagles at the same venue in Round 12, Adelaide's victory marks the first time the Crows have won two games in in Perth in the same season. To their credit, the Dockers did not cease trying, despite the Crows increasing their lead at every quarter.
Read more

Hawks Run Over Dockers and Head for Grand Final

Hawthorn has been Fremantle’s bogeyman ever since the 2013 Grand Final and the Dockers' disappointing defeat. If there were a team that Fremantle would rather face in the Preliminary Final it would be anyone other than the Hawks. Fremantle may have had the week off courtesy of a good win over Sydney but the Hawks, having beaten the Dockers in their last encounter at Domain and in the dynamic form they showed in last week's demolition of Adelaide, had nothing to fear in coming back West to play them in the Peliminary Final. As it turned out Hawthorn dominated Fremantle to have them sliding out of the Finals and racing gently into that good night called the off season.
Read more 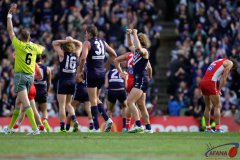