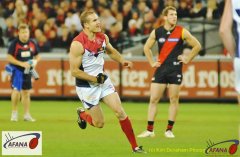 Adam Goodes has always been a spokesperson for his people, their indigenous heritage and a strong voice against racism. As a result, he has become highly respected off the football field as well as on and was named Australian of the Year in 2014. In 2013, Goodes heard a fan in the crowd call out to him using a racist slur and Goodes turned and pointed her out to security guards who escorted her from the ground. The fan turned out to be a 13 year old girl.

Goodes later met with her and she apologized. He later stated that it wasn't her fault as she, being so young, may not have realized the hurt her taunt caused. In a recent game against Hawthorn, there was a clash with Hawk Josh Gibson. There has also been criticism of Goodes with some accusing him of behind the play sniping and staging for free kicks. On occasions he has been booed with fans claiming these incidents have been the source of their behaviour.
Read more

Former Adelaide star Simon Goodwin, who has been an assistant coach with Essendon, was rumored to be a candidate to replace sacked Adelaide coach Brenton Sanderson.

When Paul Roos decided to take on the coaching job at Melbourne it was a one year deal with an option for two more seasons. Roos decided to take up the option after the Demons' spirited display against Port Adelaide in Round 18. The Dees came back from a six goal deficit to get within three points and Roos said that the split round gave him plenty of time to think.

It was supposed to be a celebration of the life of Tommy Hafey, Richmond’s iconic four time Premiership coach who sadly passed away during the week. Instead, for Richmond, it was a disaster of far-reaching proportions. Coming into the contest with a precarious 2-5 record, the Tigers simply had to win. Not just to keep their Finals hopes alive, not just to honor the memory of Hafey, but to give their fans some hope that their 15 win season in 2013 wasn’t a fluke. The answer to the latter is one that Tiger supporters will not want to accept and will certainly struggle to understand. Melbourne mounted a spirited effort to grind out a hard-fought win – the Demons' second in a row and third for the season. The Demon players were simply better when it counted, their masterful new coach Paul Roos earning every cent of his high-priced contract.
Read more

The week following the Grand Final saw over 100 draft hopefuls attend the AFL Draft Combine in Melbourne. The participants underwent a multitude of skills tests. Among those attending were two Americans, Jason Holmes and Mark Cisco. Holmes is originally from Chicago but had been attending Moreland State University in Kentucky. The 23 year old stands 203cm (6'6") and weighs 104kg (229 lbs). He has a background in American Football, soccer, baseball, golf and college basketball. This is not his first visit to Australia as he also trained at the Sydney Swans Academy under Paul Roos after testing well at the combine in Los Angeles. While he did not finish in the top ten in the recent combine, his results were impressive enough for the Saints to sign him as an international rookie.