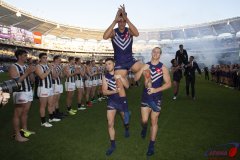 Submitted on Sun, 07/23/2017 - 4:21 AM EDT
The Hawthorn Hawks showed they still have the appetite to participate in this year’s finals by dominating the Fremantle Dockers in the final quarter at the Dockers’ home ground. Fremantle competed solidly but could not overcome the Hawk dominance in the air as the big Hawks out-marked the home side.

Hawthorn started each center bounce by positioning two extra players on the defensive side of the center square.
Read more