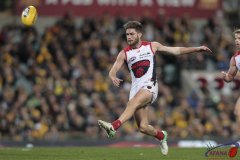 Carlton recruit Tom Bugg has put his burgeoning business ahead of his footy career, announcing his retirement. Bugg, 25, began his career with the Melbourne Demons in 2012 but was later traded to GWS. He played a total of 96 games for the two clubs. Cut by GWS, he was given a lifeline with Carlton in last November's rookie draft.

Bugg posted on Carlton's website, “My life ...  has changed in a very short period of time which has been the reason behind this tough decision ... The players and staff ... have been so welcoming and supportive ... Everyone is working incredibly hard to take the club back to where it needs to be, you see that every day when you walk through the door.”

Bugg has a social media and "influencer" agency to which he wants to devote more time.

The AFL draft was held over our Thanksgiving weekend. During the trade period, many clubs swapped draft picks to improve their positioning in the draft selection order. They were again allowed to do so at the draft ahead of making their player selections.

On to the selections, both for the main draft and rookie draft. It is club by club in alphabetical order. The number in front is the draft pick, followed by the player name, (club of origin), age, height, weight and position, followed by a brief profile. There was no preseason draft as all clubs advised the AFL they would not participate.