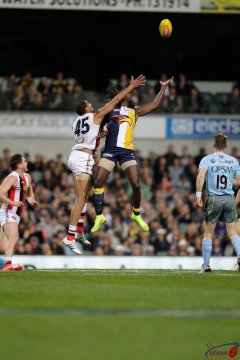 The West Coast Eagles secured second position on the Premiership Ladder (AFL standings) with a double chance and home Finals after an old-fashioned belting of St Kilda at Domain Stadium in Round 23, the final round of the regular season. The Saints looked set to recover after absorbing a couple of opening round barrages with West Coast scoring four goals before the Saints had even heard the last echoes of the opening siren. The Saints' players put plenty of pressure on the Eagles’ ball carriers and pegged back a couple of goals to make a reasonable fist of the first quarter. In fact, St Kilda had plenty of the ball but couldn’t find a way to put more scoreboard pressure on the Eagles.

The Saints had worked out a way of penetrating the suffocating press put on them by the Eagles. They were kicking very accurately over short distances and hitting up targets. It was left to the Eagles’ last line of defense in many cases to stop them bursting through. Even so the Saints had the ball at their scoring end with regularity but could not put together enough accurate kicking. West Coast players were fumbling the ball and didn’t have the sharp edge they had been showing for months. It wasn’t until eight minutes before half time that Jamie Cripps kicked the next Eagles' goal. This was quickly followed by goals from Callum Sinclair and the in-form Mark LeCras with his third for the game. St Kilda had one highlight in the quarter when Hugh Goddard kicked his first goal in League football, but from there on it was all downhill.

West Coast came out after the half time break and put the Saints to the sword. Josh Kennedy found his mojo and booted three goals to not only put a lock on the game but also a lock on the Coleman Medal for the highest goal scorer in the competition. His team mates got into the action too and St Kilda went meekly out of the game and into the off season, scoring only one goal in the second half. Things weren’t all rosy for the Eagles with Chris Masten subbed off with a hamstring strain which may threaten his Finals' participation.

West Coast take on Hawthorn next week in a Qualifying Final that should go down to the wire. The Hawks beat West Coast last time they traveled here only a few weeks ago so they won’t be daunted by the venue or the home crowd advantage.