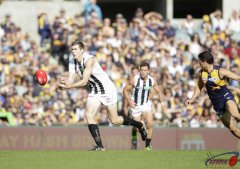 The Eagles powered through the first quarter.  Sharrod Wellingham, Jack Redden, Mark LeCras (2 goals) and Nic Naitanui all joined in the goal feast before Collingwood could score their first point. It took Collingwood 26 minutes to break through the strong Eagles half-back line, to pass to Darcy Moore who marked well and kicked truly. There was little time to celebrate though, as within two minutes the Eagles had replied with a Josh Kennedy goal. Adam Treloar ran hard for the Magpies but the visitors had been well and truly flattened and were 33 points down at quarter time.

In the second quarter Collingwood ruckman, Brodie Grundy, beaten in the air by Naitanui, started to win more ground balls than his opponent; and the Collingwood midfielders began to look more assured. The big American, Mason Cox, who had taken a clever mark in the first quarter, only to score a point, became a strong focal point in the Magpie forward line. Within three minutes he had his first goal, courtesy of a clumsy Eagles’ attempt to spoil and the subsequent free kick. The Eagles juggernaut had not been stopped, but it had been slowed. Collingwood's Scott Pendlebury, who was under an injury cloud in the pregame, powered-up up to gather 15 possessions for the quarter. He appeared unable to kick long distances, but he used handball to direct play and bring his midfielders into the game. Tom Langdon and Levi Greenwood joined a fleet of young runners to guide the ball into the Magpie forward half. The game became a genuine contest with West Coast using their precise kicking to powerful effect and Collingwood more reliant on using handball to attack. The visitors had scored three goals to the Eagles’ two for the quarter.

Four minutes into the third quarter, Cox had kicked his second goal and the survival of the visitors became a possibility. The Collingwood back line stood firm and Jack Crisp played well to kick to Moore who booted his second goal for Collingwood. Scott Lycett, who had given good support to Naitanui, then quickly steadied the Eagles with a mark and goal. At the 14 minute mark Cox brilliantly smothered a Naitanui kick on the wing, which resulted in the ball being moved quickly to Crisp who goaled for the Magpies. Four minutes later Jarryd Blair weaved and dodged to score Collingwood’s tenth goal. The juggernaut’s wheels had begun to wobble. A late goal to Kennedy gave the Eagles some breathing space, but is seemed the Magpies might have enough momentum to push towards an unlikely victory.

The Eagles quickly moved back into top gear, and the last quarter was all one-way traffic. A stunned Collingwood watched the home team kick eight goals before the Magpies’ Tim Broomhead kicked the last goal of the game, at the 31 minute mark. LeCras had gathered 27 possessions and kicked 3.3 for the Eagles. Luke Shuey and Matt Priddis were not dominant but still provided the Eagles with sufficient traction when required. Josh Smith, playing his second game for Collingwood, continued his good form; as did fellow second-gamer Mason Cox. Adam Treloar played well throughout the match to give the Magpies some direction and grunt.

Next week, West Coast will attempt to discard their growing reputation as a team that cannot win big games away from home by overcoming the Geelong Cats at "the Cattery" (Skilled Stadium). Most pundits would be shocked if the traveling Eagles were able to run over the Cats. Collingwood have another 6-day break before they meet their traditional foes Carlton at the MCG. They will need to avoid being caught in the headlights, like were in the first and fourth quarters on the road this weekend. Coach Nathan Buckley has probably done enough to keep the vultures away for a while, but he would want to avoid the stench of a loss to Carlton.