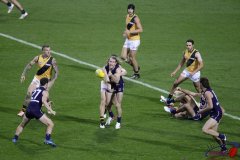 Luck was with Fremantle at the start of this game, when they won the toss and chose to kick with the advantage of a 20-30 mph wind, which blew straight down the ground. They changed their game style to kick long in the wet and slippery conditions. The Richmond defenders Dylan Grimes, Troy Chaplin and Alex Rance took full advantage of the situation, by setting themselves to destroy any Docker attempts to mark. Docker forwards Chris Mayne and Matthew Pavlich both took one mark each, but were unable to trouble the score keepers.

The game was a scraggly affair for the first 12 minutes. Then Dockers' small forward, Haydyn Ballantyne, read the flight of the ball to mark at the rear of a pack; and and kick accurately from 40 meters, to score the first goal of the night. For most of the second half of the quarter the ball was locked in the Dockers' forward zone, but Richmond had flooded players into their defensive zone to stifle any chance of a Docker attack. After 27 minutes, Richmond generated a breakout from a stoppage, which saw Shaun Grigg mark 40 meters from goal and kick accurately. Two minutes later Jack Reiwoldt marked and kicked a long goal from the boundary to leave Richmond clear winners for the quarter. The Dockers had been unable to maximize their use of the wind.

In the second quarter the teams exchanged tactics, with the Tigers kicking long and Fremantle attempting to run the ball out of defense with chains of handpasses and short kicks. However, when it was their turn, the tall forwards in the Richmond attacking zone were able to hold their marks. This provided a stark contrast between the two teams. Richmond had multiple forward options with both Shaun Hampson and Sam Lloyd drifting forward as well. The Dockers were left to hope their small men could gather the crumbs which fell from flying packs. In that quarter, Anthony Miles kicked two valuable goals for Richmond and small man, Ben Griffiths, and Grimes added one each. For the Dockers, Matthew Taberner moved through some heavy traffic to snap truly to score their only goal against the wind.

Heavy rain and strong winds made conditions extremely difficult for both teams in the third quarter. At the eight minute mark Hayden Ballantyne kicked a deliberate shot from the boundary towards goal. The ball appeared to contravene the known laws of the universe by somehow finding a meandering airborne path across the goal line. The Dockers kept the ball in their forward line for most of the third quarter, but again, were unable to take full advantage of the wind. Nick Vlastin was a standout in defense for the Tigers, as he took contested marks and intercepted several Docker passes. For the Dockers, Ed Langdon added one goal for the quarter and Ballantyne added two in a sparkling return to form. The few times Richmond did break out of defense, they were efficient into the wind with Reiwoldt, Steven Morris and Lloyd all scoring a goal each.

The final quarter continued the pattern set early in the game. Neither side was prepared to give up. Richmond mostly kicked long and the Dockers scrambled to contain the damage. The Tigers did not have a clear advantage in the ruck, but Trent Cotchin and Dustin Martin were both very active in the packs; giving their team a slight advantage in the clearances. The undermanned Dockers relied heavily on Lachie Neale who continues to build his reputation as contested ball winner. Richmond added two more goals and could have added many more, but for inaccuracy compounded by the terrible weather conditions. The highlight of the quarter came early when Edwards goaled with skill from the boundary for the Tigers. Fremantle did not give up and continued to chase and tackle. They managed one final goal into the wind, courtesy of small forward Michael Walters.

The Dockers troubles continue to grow. The loss of rapidly improving young defender Alex Pearce, who broke his leg late in the game, adds to their sorry tale. Next week Richmond return to the Melbourne Cricket Ground (the MCG) to play Essendon in the annual, "Dreamtime at the G". The title of the match recognizes the contribution of the Aboriginal players to the Australian game. The Dreamtime in Aboriginal culture was the ancient period when the world began.  Richmond's resurgence should continue for at least another week. Perhaps longer. The Dockers will travel to Etihad Stadium to meet St Kilda, who will start as favorites. For the Dockers, the bad dream continues.