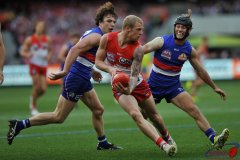 Just after the conclusion of Round Two, Bulldog premiership player Liam Picket announced his immediate retirement after 198 games. Picken, 32, has been suffering ongoing concussion issues. He sustained the concussion in a 2018 preseason game and has not played since. In that game, Picken collided with teammate Josh Dunkley in a sickening collision. He recovered enough to partake in two months of non-contact training. But it became apparent to the club and the medical staff that a return to playing in 2018 was not possible. So he focused on a return in 2019.but ongoing symptoms ruled that out. It was the second severe head knock he suffered in just under a year. n Round 3, 2017, Picken was knocked out following a collision with Fremantle’s Tom Sheridan. The incident prompted his wife Annie Nolan to share a picture of their son Malachy in tears after watching his dad being stretchered off the ground.

Symptoms included over sensitivity to light and sound, headaches, migraines, mental wellbeing and even balance. Some of the symptoms have subsided but others persist to this day, preventing him from even getting out to train.

Picken’s career has been one of perseverance, dedication, absolute physical and mental application, courage, loyalty, professionalism and team spirit, embodying the ethos of the Bulldogs. He comes from a strong football family with his father Billy starring for Collingwood, brother Marcus having a stint with the Bulldogs and cousin Jonathan a premiership player with the Brisbane Lions. He spent three seasons training with the Magpies but was never picked up. He crossed to train with the Bulldogs and was selected in the 2008 rookie draft after starring with VFL team Williamstown and winning the club best and fairest award. He made his debut in 2009, and quickly established himself as one of the competition’s best taggers. Later in his career he transformed into a successful midfielder/forward with strong goal sense, unrelenting competitiveness and impressive aerial ability. He will be remembered as one of the 2016 heroes, as he performed strongly in the finals series with eight goals - three of those in the Grand Final to help steer his side to victory over the Sydney Swans.

Coach Luke Beveridge said, “It’s never an easy thing to accept that one of the club’s great servants will finish his career ... Liam has embodied the core values we hold dear ... and we will miss his presence greatly ... We have always had a family-first mentality ... and that should always be the overriding consideration when it comes to a player’s health ... Liam can be immensely proud of his achievements. He is loved and admired within the club, and universally respected by the... football public .. ".

Bulldogs Director of Football Chris Grant (and former club champion himself) said the club would continue to support Picken into his retirement, “Liam has made a lasting impact ... and we will not forget his contribution ... Over the last 12 months our focus has been to support Liam by providing him with the best medical care and ensuring his health is our number one priority. “We will continue to provide off-field assistance for Liam to ensure he has the necessary support to return to full health ... ".