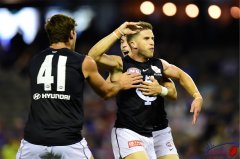 Carlton notched win number one for the season over the Western Bulldogs, Collingwood smashed the Brisbane Lions up in Brisbane, Richmond ran out winners over a struggling Sydney Swans and Melbourne’s woes continued as they went down to a committed Saint Kilda at the MCG.

Geelong was too good for Hawthorn in an entertaining Easter Monday contest while the Adelaide Crows celebrated Eddie Betts 300th game in fine style, crushing the Gold Coast Suns by 73 points at Adelaide Oval.

Essendon has firmly put its early season wobbles to rest as the Bombers rolled over a disappointing North Melbourne, meaning the AFANA Power Poll has had plenty of movement over the Easter weekend. Here’s how it all panned out as this unpredictable season continues to unfold…..

2.    Geelong Cats (4)
The 4-1 Cats continue to shine, Gary Ablett Jr. kicked three goals in his best game of the season.

3.    West Coast Eagles (1)
The Eagles were ambushed by Port Adelaide in a massive upset, as the 2019 season continues to surprise. Accordingly, West Coast lose top spot and fall to number three this week.

4.    St Kilda Saints (5)
The Saints odds-defying start to 2019 continued with a 40 point win over the Demons at the MCG, an injury to Jarryn Geary the only dampener on a magnificent performance.

5.    Greater Western Sydney Giants (2)
The Giants were shock losers to Fremantle in the nation’s capital despite fielding arguably their strongest team for the season.

6.    Port Adelaide Power (9)
Port moves back up the rankings after playing the slippery conditions to perfection against the Eagles in Perth.

7.    Brisbane Lions (6)
Two losses on the trot for the young Lions who started 3-0 but now finds itself back in the pack.

8.   Richmond Tigers (11)
The Tigers once again overcame key injuries with a return to the frantic pressure and tackling game it made famous during the 2017 premiership run.

9.    Fremantle Dockers (12)
Fremantle was brilliant in defeating the Giants away from home, the two pronged attack of Jesse Hogan and Matt Taberner proving too much for the Giants defense.

10.    Essendon Bombers (13)
A three game winning streak has the Bombers finally showing the form expected of many pundits this season. Spearhead Joe Daniher returned from injury.

11.    Hawthorn Hawks (10)
Hawthorn was competitive with a strong Geelong team but lacked the midfield polish to sustain a four-quarter challenge. Injuries have tested the Hawks depth.

12.    Western Bulldogs (7)
The Bulldogs drop five spots on the AFANA AFL Power Poll after becoming Carlton’s first victim for the season. Coach Luke Beveridge has plenty of work to do.

13.    Gold Coast Suns (8)
The Suns bubble burst in Adelaide as the Crows were simply too good for the young Gold Coast team. With a 3-2 record, the Suns have had a commendable start to 2019.

15.    Melbourne Demons (14)
It is hard to fathom how poorly the Demons are playing given their depth of talent on the list. I expect them to turn it around, maybe as soon as this Wednesday night against the Tigers.

16.    Carlton Blues (18)
Carlton move out of the cellar on the back of win number one for the season. It wasn’t so much just winning, but the way the Blues smashed the Bulldogs (44 points) on the back of top performances from their young brigade would give Carlton supporters plenty of heart.

17.    Sydney Swans (15)
The Swans went down to Richmond and never really threatened to win the game. Sydney has a big problem with scoring enough goals to win, despite having gun forward Lance Franklin up forward.

18.    North Melbourne Kangaroos (17)
The Kangaroos were abysmal in being decimated by the Bombers at Marvel stadium, sending them crashing to 18th spot on the Power Poll.