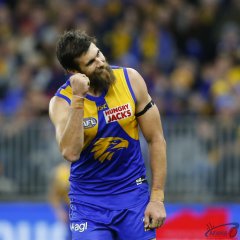 The Magpies played their role early, setting up the appearance of a contest by booting four of the first five goals. But then the Eagles clicked half-way through the second quarter and from there it was all one-way traffic. The late withdrawal of playmaker Scott Pendlebury, the absence of Steele Sidebottom, Jeremy Howe, and last week's match winner Jordan de Goey, was always going to make it tougher for the Magpies. They fought well in the early midfield battles, with Adam Treloar. Jack Crisp, and Nathan Brown working the ball through the center of the ground. Hoskin-Eliott took an early big mark (catch) to open the visitors' scoring and Darcy Cameron also used his height to trouble the Eagles' Tom Barrass in defense. Despite a nice goal by bigman Nic Natanui, it looked as if the Eagles would be exposed through the absence of their intercept marker, Jeremy McGovern, who is still recovering from injury. Cameron had two goals on the board and Jamie Elliot accepted a Treloar pass to also boot one for the Magpies. However, Josh Kennedy stepped up at the end of the first quarter to grab a mark at the back of a pack, and kick truly to keep the Eagles in touch at the first break.

The Magpies didn't give up. They won more contested possessions than West Coast throughout the match; but when they won the ball, they were stopped from doing anything creative. The key for the Eagles was their mid-field pressure. They forced the Collinwood players into error and then made them pay with interest. A goal to Oscar Allen and two quick ones to Josh Kennedy put the Eagles in front early in the second quarter. The Pies fought back with Hoskin-Elliott scoring his second at the 15-minute mark, but from then it was all West Coast. The Eagles used their high marking in attack to totally demoralize the Collingwood defense as they piled on thirteen unanswered goals to kick the year's highest score. The goal kicking accuracy of the Eagles was uncanny, with only three behinds scored on a day when the impossible became routine. Kennedy finished with a competition high of seven goals and looked like the Kennedy of old.

The Eagles' midfielders, Eliott Yeo, Tim Kelly, Luke Shuey, and Andrew Gaff applied extreme pressure at the fall of the ball and the Pies' midfielders went to pieces. Unable to find space or clear the ball, they fumbled and bumbled as well at the Washington Generals ever did. When the Eagles got their hands on leather, they spread wide in defense to create plenty of space. Nor did they rush out of defense. They used patience and short kicking to work wide across the ground until they reached the wings. With the opposition spread across the width of the center of the oval, they easily found holes in the middle. The Eagles also got numbers to the fall of the ball, so that whoever had the role of kicking into the attacking arc had plenty of protection and time to select the best target. From there it was a quick transference to their tall forwards who had the luxury of competing one-on-one. The Collingwood defenders were isolated from each other with Darling and Kennedy deliberately working apart as the ball approached. If it wasn't Jack Darling or Oscar Allen marking, it went straight to Josh Kennedy. If the big men missed, it the smaller players Gaff and Liam Ryan who nipped in for cameo goals.

Brodie Grundy tried hard in the ruck for Collingwood, but he was matched by Nic Naitanui. Naitanui also had the support of Oscar Allen. By the end of the day, Grundy had to lower his colors in his worst game of the year. Adam Treloar, Jack Crisp, and Taylor Adams tried hard in the midfield, but were swamped by the press of the Eagle midfielders. Collingwood may as well have donned orange jackets as they effectively became stationary objects for the Eagles to wheel and dodge past, in what seemed little more than a second half training drill for the home side. Jack Darling provided a brief moment of humor when he dropped a simple catch, reminiscent of his fumbles in the great Grand Final against Collinwood two years previous. It probably was a genuine error, but in the context of the rest of the game, appeared to be a lame parody of Collingwood's fumbling. Pathos was added a few moments later, when Liam Ryan booted a goal and dedicated it to his young godson who was killed in a traffic accident cycling to school, in the week leading to the match. The show went on and West Coast partied like Globetrotters.

Collingwood are not as bad as they seemed, but will need to find a way to match a team who can pressure them in the midfield. The Eagles will need to stay grounded and prepare to do the same thing in the wet. Next week the Eagles stay at Optus to play the Geelong Cats. Collingwood remain in Perth to meet the Fremantle Dockers. The Magpies will be hoping to leave Perth with two wins from three outings.