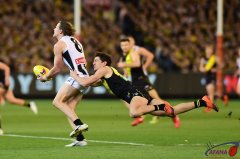 Collingwood defender Tom Langdon has been forced to retire due to a chronic knee injury. Langdon, 26, was drafted in 2013 and played 89 games for the Magpies. A mainstay of the backline, he was named one of the best on ground in the 2018 Grand Final against the Eagles. He suffered severe cartilage damage just two months into the 2019 season and has not played since. General manager of football Geoff Walsh paid tribute to Langdon, “Tom played some wonderful football ... and it was a sad day when the reality of his premature retirement arrived. We saw him work incredibly hard to get back. He pushed himself through so much pain to keep his hopes ... flickering. Given his talent and application, his finish is a cruel football story." Walsh himself also announced his retirement after 36 years as an administrator.

West Coast delisted premiership forward Daniel Venables as he continues to recover from concussion issues. Venables has not played since mid-2019 when a collision with Melbourne's Tim Smith caused the concussion and serious brain trauma. According to the Eagles, he has made some decent progress in recent months and the Eagles are hoping he can make a return to playing. List manager Darren Glass said, "We remain committed to helping Dan strive to play ... again. But ... our primary focus remains Dan’s health and wellbeing."

The club has been working with the AFL to explore all options in an effort to retain Venables on their list. One option is to redraft Venables to the rookie list. The other would be to pick him up during the preseason SSP. Once medically cleared, he would be allowed to train with the club. Venables, 22, was drafted in 2016 and played 21 games.

The Eagles have also moved senor midfielder Mark Hutchings to the rookie list. Hutching, 29, was drafted in 2010 and has played 116 games, including the 2018 premiership.