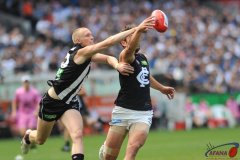 Researchers at Monash University in Melbourne conducted a study between 2017 and 2019. The study, published in the journal Biomarker Research, carried out baseline blood tests on between 100 and 200 Melbourne University Blacks players in the preseason each year. They then followed up with more blood tests and MRI scans on 28 players who had suffered concussions. Blood samples were then collected at two, six and thirteen day intervals. The researchers found a biomarker protein called Neurofilament light (NfL). Elevated levels of NfL is an indicator for damaged brain cells. The study found NfL levels doubled from the baseline figures after one week and had tripled after three weeks. The study concluded that, even though concussion symptoms had subsided, players had not fully recovered and were still at risk for further damage if they returned to play. Another study tracked amateur Aussie Rules players for five years and found those players were most likely returning to play with elevated damaged brain cells even though they reported no symptoms. Advanced brain imaging of the concussed players supported the findings that came from their blood tests.

When symptoms were present, the study discovered that NfL levels did not change and only appeared when outward symptoms had disappeared, "Assessments indicated that symptoms were apparent at two days [post-concussion], but not at six and 13 days post-SRC [sports related concussion]. It went on to say, "..., our findings of blood bio-marker changes in males beyond two days provides further evidence that neurobiological recovery may take longer than clinical recovery."

The researchers believe their study could be used as a more accurate way to diagnose concussion in men. The women involved in the study did not show differences in NfL after concussion.

Dr McDonald said Monash research into other sports showed elevated levels of NfL are still prevalent one month after a concussion, "Some players may be returning to play before the brain has recovered and potentially is still in a vulnerable state. Repeated concussions can have cumulative effects and these can result in worsened and potentially long term outcomes for players who sustain repeated concussions."

McDonald went on to say concussed players could be tested for the NfL protein. In the AFL, players who have suffered a concussion generally return to play one to two weeks after the incident. The presence of NfL has raised concerns players are returning to play too soon. McDonald believes the NfL bio-marker could be a breakthrough in determining when a player could safely return to play, "It's very difficult to actually establish when a player has recovered from concussion and it's completely reliant on self-reporting of symptoms. This protein in the blood  may be able to actually indicate when the brain has recovered and therefore may be used as an objective tool to guide when it is safe to return to play. "

The AFL tightened its concussion return-to-play protocols ahead of the 2020 season. The new rules meant a player had to pass a Sport Concussion Assessment Tool test a full five days before playing again. It meant it would be hard for a player with a six-day break or less before their next match to play post-concussion. That five-day period had previously been a guideline but the AFL said it would fine clubs who did not abide by it.

One who knows all about it is former Collingwood and Brisbane player Jack Frost (54 games with Collingwood 2013 to 2016 and two games for Brisbane 2017 to 2018). Frost, 28, suffered 14 concussions in six seasons and was forced to retire. He still suffers memory loss, does not remember key moments in his life, has trouble sleeping, is sensitive to noise, finds cafes problematic, has mood swings and can't handle any physical activity more strenuous than a light walk, "My partner asked me a while ago, 'Can you remember our first date?' and I just couldn't recollect it. "I can't exercise or get my heart rate up at all without getting headaches and feeling like I'm in a fog or getting head spins or dizzy. I struggle to go to sleep, stay asleep, I wake up all the time so therefore in the mornings I wake up and feel super lethargic."

He has welcomed the new findings and believes the decision about returning to play should be taken out of the hands of the AFL, "...It needs to be passed on to some sort of governing body that has specialists and can treat everyone with the same tests, make them run through the same tests and make sure that they actually are OK. If you do that it gets rid of so much grey area from the club's perspective, from a player's perspective, from peer pressure, from family pressure and there's no excuses then and there's no hiding from it, there's no fluffing of results. I think the measures that are in place to treat and manage concussion [in the AFL] aren't where they need to be. They need to treat it as someone's life, not just another injury."