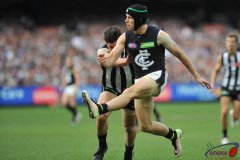 Murphy was the number one selection in 2005 and captained the side from 2013 to 2018. He was named in the All-Australian team in 2011, the same season he won the first of his two best-and-fairest awards. Murphy joins John Nicholls, Bruce Doull, Craig Bradley, Stephen Silvagni, and Kade Simpson in Carlton's 300 club.

He played in just six finals but said the elimination final victories over Essendon (2011) and Richmond (2013) stand out as career highlights, "Just all the excitement and energy with family coming into the rooms and to be able to hang out with blokes after working so hard to achieve a finals win, those are the memories I'll cherish."

Murphy will take a break from football next year but has not ruled out a return in some capacity with an AFL club, "I still have a real passion for the game but I'm also very keen to challenge myself in another area ... ".

David Teague, who played alongside Murphy - after crossing from North Melbourne - in 2006 before becoming senior coach in 2019, praised his dedication to Carlton when he could have sought out a more successful club, "Marc has been a great player for our football club for a very long time, he is truly one of the modern-day greats in navy blue. He captained this football club through an incredibly difficult period, making this 300-game milestone even more special and only adds to the esteem in which he is held at our football club."

Carlton co-captain Patrick Cripps, who took the reins from Murphy in 2018, also paid tribute, "Murph was someone I'd admired growing up with how he played the game but what stood out when I got to the club is how good of a bloke he is."

Murphy comes from a wonderful football family, despite the lack of success Like his teammate Jack, he is a third-generation Blue following in the footsteps of father John and grandfather Leo. He had the option of being a father-son selection at the Lions but decided to stay close to family in Victoria. As he heads into his final game, he is guaranteed to finish with a higher winning percentage than his grandfather or dad - despite the club's darker days of the early 2000s.

Despite of a lack of premiership success, the Murphy's do have plenty of accolades. Leo won two best and fairest awards in his 132-game career with the Hawks, while John won five best and fairests with Fitzroy and one with South Melbourne before playing his one and only finals match with North Melbourne in 1979. He played 246 games for 95 wins. Marc has been involved in only 117 wins and one drawn game ahead of his 300th game.

That gives the trio 10 best and fairest awards between them but just 243 wins and two draws in a combined total of 677 games that includes just seven finals. Murphy played six of those finals. The trio also polled 234 Brownlow votes between them. By comparison, three generations of the Silvagni family, the late Sergio, Stephen, and Jack, have experienced victory 366 times in 629 games and the Kennedys, the late John, John Jr., and Josh, have played in 392 wins in 683 games. Jack and Josh are still going with Carlton and Sydney, respectively. Michael Tuck (302 wins), Shaun Burgoyne (262), and Kevin Bartlett (260) were all fortunate enough to play in more wins than the Murphys' combined tally. “To reach a milestone for the whole family, everyone is pretty proud,” Murphy said.