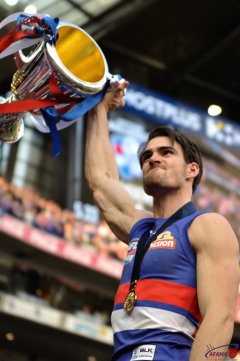 Although he still had another year on his contract, he did consider retiring after a hamstring injury in Round Nine of this year, “I was well and truly sick and tired of doing hamstrings,” Wood said, noting his leap and speed had suffered significantly this year, “Particularly the way that one happened, I was just running in open field … I thought my body was telling me that it might not be up for the rigors of footy anymore. After much thought I've decided to retire from the game I love so much, at a club which has been my home for 14 years. While it’s been difficult to confront, the reality is I’ve athletically declined. I wanted to finish up on my own terms and I felt that if I declined further next year, I wouldn’t have that opportunity. I’m proud to go out as a member of the team and being part of an amazing run to get to the Grand Final.” Wood also said he was partly motivated by a desire not to detract from the Bulldogs' premiership chances next season.

Wood kept those thoughts to a trusted inner circle but knew heading into the finals series it would quite possibly be his last and informed the club of his decision to hang up the boots before the trade period began. Wood said he is ...  “at peace with the decision ... ”. Wood said it was a “real shame” he was unable to inform his teammates of his retirement decision in person because of Melbourne’s COVID-19 lockdown, which ended the day after he made his announcement. He will be given the opportunity to address the entire playing group next year.

Wood was drafted in 2007 and played 188 games. Despite his position as a defender, he did manage 20 goals in his career. He first became captain in 2016, filling in for Bob Murphy, who had suffered an ACL rupture early in the year. It was Wood who skippered the club to their second premiership in 2016. He continued in the role until relinquishing the captaincy to Marcus Bontempelli in 2020. Wood won a club best and fairest award and All -Australian selection in 2015 but will be best remembered as one of only two AFL/VFL premiership captains in Bulldogs history so far.

Coach Luke Beveridge said Wood has been admired for both his football ability and impact off the field, “We’ve been extremely fortunate to have Easton as part of our organization for as long as we have. ” Fans paid tribute to Wood on Twitter. Here are a few of those:

Thank you, @easton_wood, for everything, Red heart

Congratulations on a fantastic and successful career
@easton_wood, loved watching you play each week, and thank you for bringing the most unexpected jubilation to our family, and so many @westernbulldogs supporters in 2016. Enjoy retirement mate, I owe you a beer one day 🍻

Easton Wood may be one of the most underrated players of the last decade. What a career, and what a list of achievements he has. A humble champion

From a Hawthorn supporter, congrats and well played Easton. You’re a class act on and off the field. All the best for your next steps

One of only two premiership captains in our history. What a player, what a person. Thank you @easton_wood, , forever grateful

The Crows did not offer Adelaide defender Daniel Talia retired when the club did not offer him a new contract. It was thought he would continue with another club. Richmond had shown interest before acquiring Robbie Tarrant during the trade period. He was restricted to just 14 games in 2021 due to a foot tendon injury. His manager Liam Pickering spoke on SEN several days prior and said Talia, 30, would need more surgery and miss all of 2022, but Talia later confirmed he would retire completely. He played 200 games and earned All-Australian selection on two occasions.