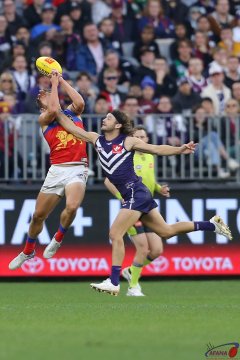 Brisbane's first quarter was notable for their attack on the ball. They won the clearance battle with Jarrod Lyons, Lachie Neale and Zac Bailey determined to show the young Docker midfielders how to win the ball in tight situations. Lyons was a tackle machine and refused to give the Docker midfielders space to complete meaningful disposals. Oscar McInerney and Darcy Fort initially edged Fremantle's Sean Darcy and Lloyd Meek in the ruck and after thirteen minutes of play which was mostly in the Brisbane attacking zone, full forward Daniel McStay's snap kick from a stoppage, registered the Lions' first goal. Two minutes later the hulking Lloyd meek roved a pack and snapped the Dockers' first major (goal). The Lions then intensified their efforts and forward Keidean Coleman kicked a magical goal before kicking long from the center to Charlie Cameron who took a skillful mark to boot Brisbane's third. The Dockers sent Caleb Serong to shadow the Brisbane ball magnet Lachie Neale. This reduced Neale's dominance, while Serong was able to match Neale's possessions. The Dockers played defender Griffin Logue in the forward line with the task of stopping Brisbane's main intercept marker Marcus Adams. Logue's aerial ability blunted Adams' defense while helping himself to two goals for the game.

The second quarter saw Fremantle's Andrew Brayshaw re-assert himself in the midfield. With Brayshaw, James Aish and Will Brodie working in unison the Dockers got on top in the middle. Rory Lobb took a strong mark in a big pack to boot the Dockers' second goal, before Brayshaw found some space and kicked long to Logue who added another major. Ten minutes later the Dockers used a chain of handpasses to slice through the Brisbane midfield and launch Aish to put the Dockers in front. The Lions, who are second on the ladder weren't going to lie down. The pushed forward after the next bouncedown and Eric Hipwood floated across a pack to take a towering mark and convert from close range.

After the main break the Lions got straight down to business. McInerney knocked the ball out of the ruck 40 meters, Lyons gathered and booted to a marking contest and Cameron did what Cameron does, to swoop on a ball and boot his second major. Five minutes later Serong ripped through a marking contest to collect the ball and kick truly from 40 meters, to bring the Dockers back within one point. The Lions responded by attacking again and Zac Bailey grabbed a ground ball to snap and restore the Lions' seven point lead. The Dockers then dominated at center clearances and stoppages, to boot five unanswered goals in nine minutes. Unlikely hero, Bailey Banfield, booted two consecutive goals, Lobb and Michael Frederick kicked one each. Banfield kicked his third for the quarter after Brodie broke away from the center bounce. The Lions then steadied with a brilliant individual effort from Zac Bailey to boot his second for the quarter, but the Dockers mid-field dominance had seriously wounded the Lions.

Both teams traded goals in the final quarter, however, the Lions did not have the legs to make up for the third quarter Docker flurry which inflicted so much damage on the visitors. Lincoln McCarthy brought the Lions back within 11 points after some brilliant play by Cam Rayner, but a loose Michael Frederick booted a good running goal and a free kick to Banfield, who kicked truly, sealed the deal for the Dockers. The Lions didn't give up, but couldn't get closer than 14 points. The game was played in a finals-like atmosphere with the home crowd of 47,214 enjoying the fact that the Dockers have knocked over the competition's  top two teams in consecutive weeks. Next week the Dockers remain at Optus Stadium to meet Hawthorn. The Dockers will have to overcome their poor wet-weather form to win against the Hawks. Brisbane return to the Gabba where they will start favorites against fifth placed St Kilda.