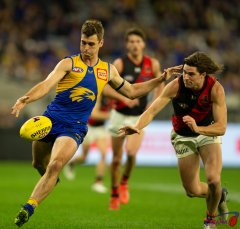 Peter Wright (known as two-meter Peter), used his height to trouble the Eagles' defense taking marks at will; but finished with two goals and two behinds (worth a point each) for the quarter. Had Wright kicked accurately the Bombers would have been set for a win. At the other end of the ground, Josh Kennedy converted from limited opportunities to also have two goals to his name. The Bombers dominated the midfield and by positioning their two wingers Will Snelling and Sam Durham behind stoppages, they were able to lock the ball in their forward line for long periods.

In the second quarter the Eagles increased their mid-field tackling and their defenders gave the Bomber forwards less room to move. Josh Kennedy wound back the clock and weaved between two tacklers to handball to Jamie Cripps, who converted within the first minute. Seven minutes later Willie Rioli took a well-judged mark against Dyson Heppell to boot a goal. When Jamie Cripps followed up with an intercept mark and goal after a poor Essendon defensive kick, they hit the front. The Bombers regained the lead when Wright to a high mark close to goals. Five minutes later the Eagles transitioned the quickly from defense with long kicks and Darling marked and converted to put the Eagles back in front. The Bombers responded two minutes later when Guelfi read the ball of a pack and snapped truly. Two minutes later Rioli pounced on a loose defensive handpass by Zach Merrett in the goal square and the Eagles were again in front. The Eagles extended the lead just before half time with another quick transition which finished with Kennedy on the boundary line. Kennedy kicked truly from 40 meters to put the Eagles seven points up. The Bombers added two behinds to make the difference less than a goal at the main break.

The Bombers continued to dominate in the midfield in the third quarter. Peter Wright took another mark and booted his fourth goal to put the visitors back in front, after two minutes of play. The Eagles then cut Wright's supply by positioning players in his path to stop his run at marking contents. This gave the Eagles fullback, Tom Barrass a better chance of spoiling Wright's marks. The Dons then relied on their small men to make position for short kicks, or gather the crumbs from packs to and snap goals. Nic Martin and Archie Perkins added two more for the Bombers but Jake Waterman, Liam Ryan (two goals) and Cripps with his third goal, had the straight-shooting Eagles eleven points up at the final break.

The Bombers fought on in the final quarter and defended desperately when the Eagles attacked. When the Bombers attacked their aggressive field positioning left them vulnerable to quick transitions by the Eagles. After five minutes an Eagles break-out found Rioli in space to kick his third goal. The Bombers still had control of the midfield through Merrett, Dylan Shiel and Jake Kelly and it wasn't long before Bomber pressure caused a turnover which finished with a Stringer mark and goal, to bring the Bombers back into the game. Kennedy booted his fourth after a big mark for the Eagles and then Harrison Jones got one for the visitors, to bring the margin back to fourteen points. When Kennedy showed agility to boot is fifth the game seemed over. However, the Bombers scored two quick goals through Martin and Jones to threaten again. The Eagle defense held repeated Bomber attacks at bay for the final two minutes to taste their second win for the year.

Next week the Eagles welcome back Nic Naitanui as they travel to the MCG for the daunting task of playing the Richmond Tigers. The Bombers will rue this loss, having controlled play for much of the game and made sixteen more attacking entries than the Eagles. Their next match is against the Sydney Swans at the MCG. It will be a tough challenge against the Swans, who are flying after making the St Kilda Saints look ordinary.