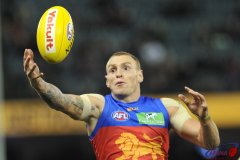 Brown said he had been contemplating his future in the game for the past couple of months and was comfortable with his decision to retire, “I’d like to thank the club for the journey, I’ve spent a third of my life here and with a young family I am now ready for the next chapter. I remember being overlooked in my draft year in 2010 and to be given the chance to play AFL in my home state the year after is something I was very grateful for. So to be here 11 years and 189 games later is something I’ll forever be proud of. My first game was memorable as were all the finals I got to play in, and as disappointing as the grand final in 2017 turned out to be, to have that opportunity at the top level is something I will always cherish. I’ll leave with lifelong friendships and always be proud to have played my career at the Adelaide Football Club.”

Crows Coach Matthew Nicks said Brown retired as one of the most respected players in the locker room, “Browny’s playing career speaks for itself, 189 AFL games of the highest quality and someone you could always rely on ... as one of our most experienced players, his influence in recent years in helping the development of our younger players has been just as important and that’s part of the legacy he leaves here... "

Brisbane's Mitch Robinson decided to retire. Robinson, 33, was recently told he would not be offered a new contract. Robinson was originally drafted by Carlton and played 100 games for the Blues before joining Brisbane as a delisted free agent at the end of 2014. He played 147 games for the Lions. His last game was the elimination final win over Richmond at the Gabba. To mark the occasion, his family was part of a guard of honor as the team ran out for the game. In 2015, he was named the player's player in 2019 and was named an All-Australian in 2019 and 2020. He kicked 129 goals across his career. Robinson said he wanted to thank everyone who had supported him throughout his AFL career, "After 247 games ... I have given everything I could to get the best out of myself, and it's now time to hang up the boots. I am beyond proud of the career I have had and feel very privileged to have pulled on the Brisbane Lions and Fitzroy jumpers in my time ... Thank you to all my Brisbane Lions teammates, the staff, members, and fans for all the love and support you have shown me ... over the past eight years."

Brisbane General Manager Danny Daly, thanked Robinson for his time and service, " ... the Club would like to extend a sincere thank you to Mitch for the significant contribution he has made ... He is a fan favorite who brought energy and spark to The Gabba, his game and to the locker room. Robbo will be missed ... "

Collingwood delisted Callum Brown, Tyler Brown, Isaac Chugg, and Liam McMahon. The Brown brothers - sons of former champion Gavin Brown were falter-son selections in 2016 and 2017 respectively. Callum played a total of 70 games and kicked 23 goals, but was restricted to 20 games in the past two seasons due to injury and poor form. Tyler missed all of 2021 with a shoulder injury followed by a fatigue-related illness this year limiting his selection opportunity. Chugg played two games while McMahon never made a senior appearance.

Fremantle delisted Connor Blakely and Joel Western.  Blakely played 78 games after being selected in the 2014 draft. He did not play any senior games in 2022.  Western played four games for the club in 2021.

Veteran Geelong Cat Shaun Higgins has announced his retirement after 260 games. Higgins, 34, has not played since Round 16 due to injury. Originally drafted by the Bulldogs, Higgins also .played for Melbourne before crossing to the Cats where he managed 23 games in two seasons. He was named All-Australian in 2018. Higgins said, “I feel privileged to have been able to play at this level for 17 seasons at three great clubs. I feel enormously lucky to have lived out a childhood dream of playing footy and I’m thankful for all the friendships, memories and support through the years. I am grateful for the opportunity to have represented Geelong, it’s a special Club and while having only been here for two seasons, the place and people have had a lasting impact on me. There have been so many people who have helped me along the journey, I’d like to thank my wife Heidi and children Rosie, Harry and Emme, my Mum, Dad and my extended family ... Thank you also to the teammates I’ve been able to share the locker room and field with and my coaches for shaping me as a player. While I have experienced some challenges with injury this season, I’m comfortable knowing I’ve done everything I can to make a return ... while it hasn’t worked out, I’m focused on playing my part in helping the team best prepare for Saturday’s Grand Final ... ".