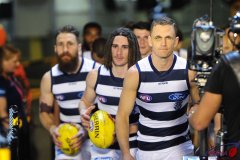 He did speak with a few close to him shortly before going public, “The visit to Hawk’s (Tom Hawkins) house wasn’t easy,. We played over 300 games together which is ridiculous. It’s been unbelievable. I’ve had great support all the way along. I’ve loved going to work. You don’t come to the Geelong footy club to go to work for money, you come for the experience and I’ve loved every part of that.” He also spoke with Patrick Dangerfield and Mark Blicavs, both of whom said it was his decision to make.

He leaves the game as one of the most decorated players of all time (see below). The Grand Final saw him surpass Hawthorn's Michael Tuck for most finals played (40) in league history. Selwood said he knew heading into the finals series that these would be the last appearances despite several teammates wanting him to play on. At the press conference he said, "This is actually probably a little bit easier for me today than probably what most people would think. About six weeks ago I decided that this would be it ... It was a decision made amongst my manager ... I got him to ask a few (players) as he's got a few of the current players on the list – Mitch (Duncan), Tom Hawkins, Tom Stewart, over the year to just see how I'm going and if I should move on. I then touched base with Paddy Dangerfield obviously to see how he thinks I'm going through background chats and they're as loyal people as you would get. They all want me to play on ... "

Scott said Selwood was the best player he had ever seen, "The thing that continually struck me about Joel was his ability to care for others and prioritize others. When you take everything into consideration, he's the best player I've ever seen and the best representative of the Geelong footy club that you could possibly imagine. Even when the opportunity came for him to take a bit of the limelight his priority was to make sure that his decision didn't negatively impact anyone else."

An emotional Selwood reflected on a moment with young gun Sam De Koning during the last quarter of the Grand Final, "I take you into a moment on the weekend, but I came off in the last quarter, Sam De Koning was on the interchange bench with me on one side, Blitz (Mark Blicavs) was on the other side and Sam just said, 'You can't finish' which is pretty special. A 21-year-old kid probably read the moment, Blitz knew I was in a bit of trouble, the heart was racing, the eyes were watering and I knew that I was going out for my last 15 minutes of the game, of my career and, yeah, I am a little bit soft."

[Ed. note: HIs full interview, stories, and recollections can be heard at the AFL web site and on the SEN podcast on Dwayne Russell show of Sept 29.]