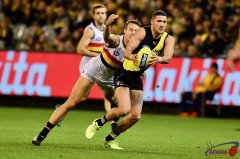 Grigg, 31, finishes his career with a total of 214 matches to his name. He played 43 games with Carlton from 2008 to 2010 before requesting a trade for better opportunities. He was traded to the Tigers where he played a further 171 games. Grigg played mainly as a midfielder but did pinch hit in the ruck in 2017. He won a Rising Star nomination in 2008 and played in the International Rules Series in 2011.

Speaking on the Richmond website, Grigg said, “It’s been amazing to play 13 seasons ... with two great clubs. I’ve loved my football journey, and feel incredibly grateful for the opportunity to play ... Although it’s difficult to make the decision ... it may give the club a chance to provide someone else an opportunity.”

Richmond GM Neil Balme praised Grigg, “Shaun has been a wonderful contributor to our football club on and off the field. We’ve loved the way he’s gone about his football – always bringing a team-first attitude ... He brings a lot of fun to the club, and has built great connections to his teammates, staff and coaches, and we will miss him ...".

Just two days later, Bulldog premiership hero Tom Boyd announced his retirement after struggling with physical injuries and mental health issues. He said he had just lost the desire to play. Boyd, 23, said, “My decision ... is a reflection of issues I’ve had over the past five years both with physical injury and with mental health, and they have now accumulated to a point where I just don’t have the desire to play or the enjoyment of the game I used to have ... ”.Boyd said he had spoken with club officials, family and friends and is satisfied that he has made the right call. Boyd thanked the club for giving him his opportunity and for the support he has received. He concluded by saying, “Leaving the game as a premiership player is something I will always be proud of, along with all the enduring relationships I have forged and the memories I have created along the way.”

Football Director Chris Grant praised Boyd for his contributions to the club, “Everyone ... is saddened to hear of Tom’s decision ... given he is a much-loved and respected person ... Over the last few years we have worked very closely with Tom and his family to support him ... and we will continue to offer that support ... We will not forget the role he played ... especially in the 2016 finals series when he showed ... what he was capable of, on the biggest stage possible ... ".

Boyd was the number one draft pick in 2013, selected by GWS. He played nine games for the Giants in 2014, then requested a trade back to Victoria and nominated the Bulldogs as his preferred destination. He played 14 games in 2015 and, while not setting the world on fire, showed enough that he was worth the massive contract. He was also a Rising Star nominee that year. He missed six weeks in 2016 with a shoulder injury and returned through the VFL, returning to the seniors in Round 17 and was an integral member of the team for the rest of the year. He polled well in the Norm Smith voting, missing out being named Grand Final best on ground by just a few votes. Boyd played just 10 games in 2017 due to back and calf injuries. Then after being diagnosed with clinical depression, Boyd asked for an indefinite leave of absence, returning to play the last two games of the year in the VFL. In 2018, the back problem prematurely ended his season after Round 16 and it continued into 2019, preventing him from training or playing.